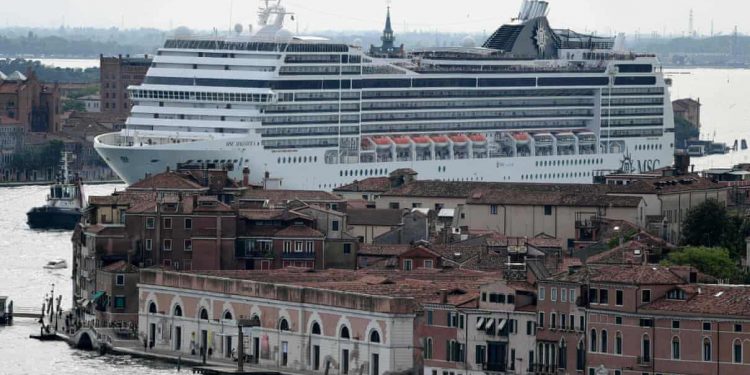 Cruise ship opponents are planning a party in Venice after two Italian cruise operators announced they were dropping the city from their 2020 itineraries.

Activists with No Grandi Navi (No Big Ships) said the lagoon had been “liberated” after MSC Crociere and Costa Crociere decided their vessels would instead set sail from Trieste or Genoa when services resume on 16 August and 6 September respectively.

It is unclear for how long the companies will steer clear of Venice, where locals have been campaigning for years to have cruise ships banned, but the new itineraries will be in place at least until the end of the year.

The ports of Trieste and Genoa are said to be more practical for access and for managing passenger flow safely within coronavirus regulations.

Other cruise companies that usually stop in Venice, including Royal Caribbean, are said to be on standby, with services more likely to resume in 2021.

No Grandi Navi has organised a celebration on San Giorgio island on Friday evening. “We said it, we promised it, and this is how it will be: no ship will enter the lagoon for the entire season,” the group said in a statement.

However, the planned celebration has been criticised in some quarters because around 5,000 jobs that are maintained by the cruise industry are at risk. Staff at the Venice cruise terminal have been furloughed since the outbreak of the pandemic.

“We receive calls every day from people who haven’t worked since March,” Antonio Velleca, a spokesperson for Portabagagli, a luggage handler cooperative in Venice, told the Italian press. “Many have not received their furlough money and are anxious about the future.”

Protesters argue that cruise ships have seriously damaged Venice’s fragile lagoon and pollute the environment. They have long called for the vessels to be banned from the city, and the protests grew more fervent in June last year after four people were injured when the 13-deck MSC Opera crashed into a wharf and tourist boat along the busy Giudecca canal.

A few weeks later the 12-deck Costa Deliziosa narrowly missed colliding into a yacht during a storm. The Italian government pledged to reroute the vessels, but a plan is yet to materialise.

“The loss of the cruise industry is an economic damage that Venice can’t afford,” said Pier Paolo Baretta, an under-secretary at the economy ministry. “But to maintain it, we need to find a solution as soon as possible.”