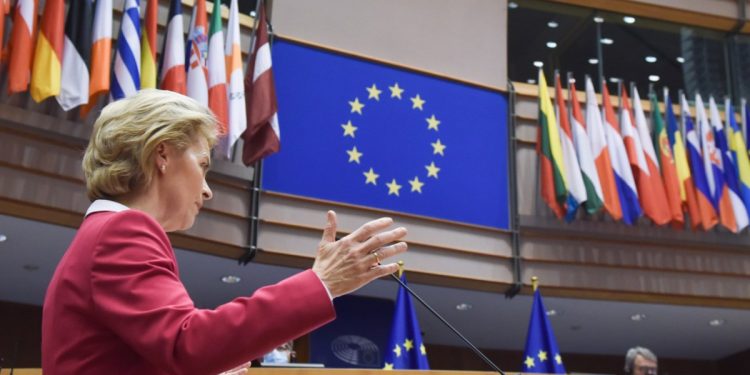 With a Commission that is in office for less than a year, today marked the first attempt at a grand outline of political priorities for this parliamentary year. The new budgetary mechanism, Next Generation EU, and the Commission’s focus on a green transition of the economy was a repeat of last months’ work, with few surprises, other than the announcement of a new EU agency, BARDA.

The new set up r Biomedical Advanced Research and  Development Agency, to give it its full name,  will support the EU’s readiness to respond to cross-border threats and emergencies, as well as the stockpiling of pharmaceutical products.

The European Medicines’ Agency will continue to be at the centre of disease prevention and control. The EU’s competence in the field of public health is not entirely clear, but there is a push to add a stronger “health union” to the other policy drives that  run  in parallel to core  EU functions. The new programme, dubbed EU4Health, is in line for more funding. To strengthen crisis preparedness, the Commission also aims at hosting a Global Health Summit next year as part of Italy’s G20 chairmanship.

In the drive to  create  a humane economy that protects EU citizens against the risk of illness and unemployment, there are plans for a proposal on an EU-wide framework for minimum wages. Commission President von der Leyen promised equal access to minimum wages either through collective agreements or through a statutory requirement for minimum wages across the EU.

While promising to achieve climate neutrality by 2050, the European Commission proposes to increase the 2030 target for emission reduction from 40% to at least 55% in line with the latest impact assessments. That would ideally restrict  global warming by 1.5 degrees Celsius. Any new legislation should be due by next summer.

The European Green Deal is, according to the Commission President, a systemic modernisation that involves a reform of energy taxation while tackling  everything from hazardous chemicals to deforestation to pollution. Green finance and green bonds are part of this change, which draws on  the Next Generation EU budget by investing in European projects involving hydrogen as an energy source, renovation and setting up one million new electric charging points.The proposed new European Hydrogen Valleys should modernise industry and a new European Bauhaus architectural hub will contribute to greener housing projects.

President von der Leyen announced that the European Commission is ready to invest a significant amount of money and time in the building of a Digital Unionas part of what she dubbed the digital decade during which the Commision will lay special  emphasis on data technology, and artificial intelligence. Effective broadband connections in all Europe’s regions are key  to improved  connectivity.

Support for the people of Belarus

“Be it in Hong Kong, Moscow or Minsk: Europe must take a clear and swift position”, von der Leyen announced  at the Brussels plenary in  a clear allusion to  Russia.

“The European Union is on the side of the people of Belarus. We have all been moved by the immense courage of those peacefully gathering in Independence Square or taking part in the fearless women’s march.” In a show of support for  the demonstrations against the election outcome in Belarus, von der Leyen levelled criticism at President Lukashenko.

“The elections that brought them into the street were neither free nor fair. And the brutal response by the government ever since has been shameful. The people of Belarus must be free to decide their own future for themselves. They are not pieces on someone else’s chess board.”

With regard to Turkey, von der Leyen made it clear that EU members Cyprus and Greece,can count on Europe’s full solidarity. She noted that  tensions have abated with the return to port of Turkish naval vessels. Moreover,  by recognising Turkey’s role in hosting millions of refugees, she acknowledged  the degree to which the EU depends on Turkey to avoid  a return to the dimensions of the 2015 refugee crisis. The aim is to put forward a new pact on migration already next week.

“We will ensure a closer link between asylum and return. We have to make a clear distinction between those who have the right to stay and those who do not”, von der Leyen said in  reference to the policy initiative presented at next week’s EU summit.

The EU is not prepared to  tolerate any breaches to its fundamental rights, whether  respect for  the rule of law, respect for  LGBTI rights, or the fight against racism and hate speech. As von der Leyen made clear,  “fighting racism is not optional in the EU”. With that in mind,  the European Commission will invest in education and knowledge to tackle unconscious bias and will appoint  an EU anti-racism coordinator, she said..

To conclude, President von der Leyen stated that the EU, now more than ever, has the tools, the knowledge, the funds, and the objectives to achieve greater things. Thus, it is now time to move ahead and put words into practice.