US troops in Poland amidst concerns about Russian threat to Ukraine 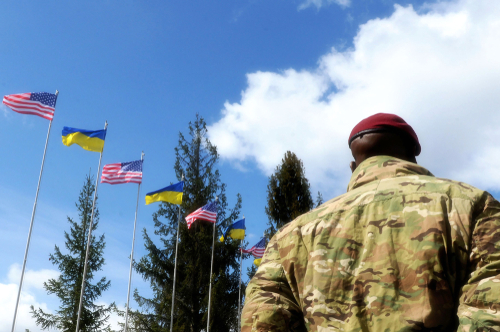 American Soldiers and flags of the Ukraine and USA at background. US military help to Ukraine.

Belgium, (Brussels Morning Newspaper) US troops arrived in Poland on Sunday as officials warned that Russia could attack Ukraine.

The US announced last week it would send close to 3,000 troops to Poland and Romania as part of Washington’s plan to reinforce NATO allies in Eastern Europe, Reuters reports.

US Army Major General Christopher Donahue noted “our national contribution here in Poland shows our solidarity with all of our allies here in Europe and obviously during this period of uncertainty we know that we are stronger together.”

Poland’s Minister of National Defence, Mariusz Błaszczak, welcoming the arrival of the US troops, added that “more planes will be landing in the coming hours… the soldiers will operate in the southeastern part of our country.”

On Sunday, US National Security Advisor Jake Sullivan gave a three-part read-out of the situation, indicating that “any day now, Russia could take military action against Ukraine, or it could be a couple of weeks from now, or Russia could choose to take the diplomatic path instead.”

He also suggested that Russia could annex the eastern Donbass region of Ukraine, launch cyberattacks or a full-scale invasion.

According to two US officials, Moscow believes it has deployed nearly enough troops for a full-scale invasion. The officials pointed out that Russia is sending more troops to the border with Ukraine.

Russia continues to reject accusations that it is preparing to attack Ukraine.

“We are already making a very important contribution in Lithuania, where we are the only country in the EU to have a battlegroup”, she asserted. “As a matter of principle, additional troops are available as reinforcement, and we are in talks with Lithuania at the moment to find out what exactly would make sense in this regard.”

Turning to Ukraine, she said “we have negotiating partners who have come back to the negotiating table… that is why it is now our task to de-escalate.”Lambrecht also declared that NATO members could count on Germany, noting that the German government wants to resolve the situation in Ukraine peacefully.