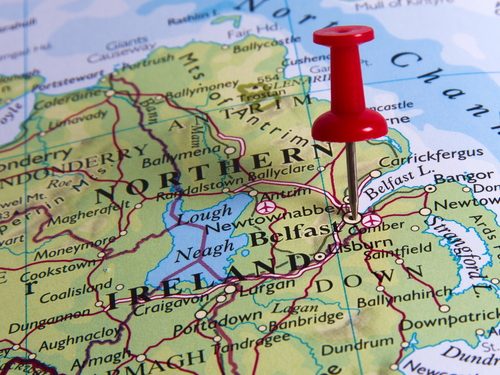 Belfast in the map with pin

Brussels (Brussels Morning) The Biden administration has no plans to take sides in the dispute between the EU and Britain over implementation of the Northern Ireland Protocol that  featurea in the Brexit divorce agreement between London and the bloc, Reuters reports.

The US position was stated by a senior administration official ahead of the virtual meeting between Ireland’s Prime Minister, Micheál Martin, and US President Joe Biden, himself a Catholic of Irish descent. The two leaders exchanged St.Patrick’s Day greetings in a video conference marking Ireland’s national day at a time when relations between London and Brussels remain strained over the Northern Ireland issue.

“The US government has welcomed provisions in both the EU-UK Trade and cooperation agreements, as well as the Northern Ireland protocol, which we believe helps protect the gains of the Belfast Good Friday Agreement”,  the official, who asked to remain anonymous, stated.

Washington, he acknowledged, is “certainly aware that there are disagreements at the moment between the UK and the EU” when it comes to implementation of the Protocol.

”We view that as a trade issue to be resolved between the UK and the EU, and hope that both sides are able to return to the table and discuss the implementation of the agreement”, the official said, pointing out that the US “is not looking to take sides in this disagreement.”

The US has previously insisted that whatever solution for Northern Ireland is agreed upon between the EU and the UK, it must preserve the 1998 Good Friday Agreement, which mandates that there cannot be a hard border on the island of Ireland. US support for the Good Friday Agreement is one of the rare bipartisan issues in both the House and the Senate.

The Brexit agreement signed between London and Brussels solved the problem of diverging customs standards by de facto retaining Northern Ireland as part of the EU customs area, a measure necessitating customs checks between Britain and Northern Ireland, and therefore complicating delivery of goods to the British province.

Faced with the prospect of a solution that pushes Northern Ireland closer to reunification with the Republic of Ireland, pro-British Protestant paramilitary groups in Northern Ireland announced earlier this month that they are withdrawing their support for the Good Friday treaty, which originally brought an end to the prolonged conflict between the Catholic nationalists and Protestant unionists.

The virtual meeting with Martin was the first bilateral event with Ireland hosted by Biden, who has yet to decide on the US appointment of a special envoy to deal with Northern Ireland. Pandemic restrictions permitting, the US President is also expected to visit Ireland this summer.