US recalls diplomats’ families from Ukraine – EU has no plans to 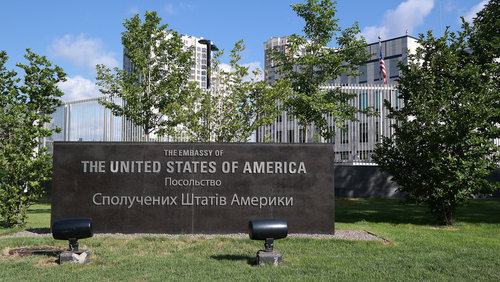 Building of the Embassy of the United States of America in Ukraine.June 14,2017.Kiev,Ukraine

Belgium, (Brussels Morning Newspaper) The US Department of State announced plans on Sunday to order US diplomatic family members to leave Ukraine.

US diplomats can leave Ukraine voluntarily, a signal that the US expects Russia to make an aggressive move, Reuters reports.

“Military action by Russia could come at any time”, the US Embassy warned in a statement and added that officials “will not be in a position to evacuate American citizens in such a contingency, so US citizens currently present in Ukraine should plan accordingly.”

The Ukrainian Ministry of Foreign Affairs described the US recommended move as “premature and a manifestation of excessive caution.”

The Ministry went on to point out that “in fact, there have been no cardinal changes in the security situation recently: the threat of new waves of Russian aggression has remained constant since 2014 and the build-up of Russian troops near the state border began in April last year.”

Russia has deployed troops near the border with Ukraine, which some in the West see as preparation for an attack, an accusation Moscow rejects.

On Saturday, UK authorities accused Russia of planning to install a former Ukrainian politician to the helm of pro-Russian leadership in Kiev. The claim has been dismissed by Russia’ Ministry of Foreign Affairs as disinformation and it has accused NATO of inflaming tensions over Ukraine.

Yevheniy Murayev, the former Ukrainian MP named in the UK report, said he had already read the news about the conspiracy theory, which he described as “absolutely unproven, absolutely unfounded.”

He suggest that he was cooperating with Moscow was “stupid”, he said, given that Russia had slapped him with sanctions in 2018. Murayev indicated that he is thinking about taking legal action.

So far the UK has declined to support what it said about Murayev with evidence.

According to New York Times reporting, the US administration is considering plans to send up to 5,000 troops to Eastern Europe and increase the figure if tensions continue to rise.

Josep Borrell, High Representative of the EU for Foreign Affairs and Security Policy, announced today that the bloc is not thinking about recalling diplomats’ families from Ukraine.

Borrell said he saw no reason for the recall “unless Blinken gives us information that justifies the move.”