US pledges support for Ukraine as ceasefire violations ramp up 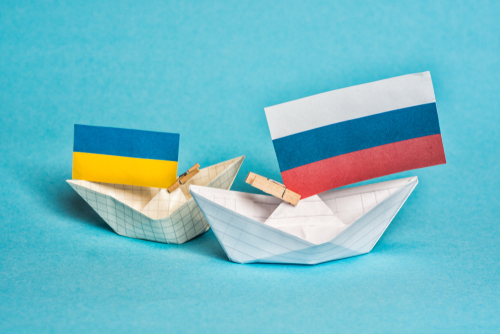 paper ships with flags of Ukraine and Russia, symbol of conflict

Kyiv (Brussels Morning) The US has reaffirmed its support for Ukraine as fears grow of a fresh full-blown conflict escalating in the eastern Donbass region, following days of ceasefire violations and the deaths of four Ukrainian soldiers, Deutsche Welle reports.

In a phone call with Ukraine’s Foreign Ministerm, Dmytro Kuleba, on Wednesday, US Secretary of State Antony Blinken  affirmed Washington’s “unwavering support for Ukraine’s sovereignty and territorial integrity in the face of Russia’s ongoing aggression.”

After a ceasefire in July last year brought about relative peace in the East of Ukraine, recent weeks have seen an increasing number of ceasefire violations. According to the Organisation for Security and Cooperation in Europe (OSCE), hundreds of ceasefire violations were recorded in just the past few days, including 493 on 26 March alone.

Blinken also expressed condolences to Kuleba for the four Ukrainian soldiers killed in fighting last week, which Kiev claims occurred when its troops came under Russian mortar fire. Moscow, meantime, continues to deny having any presence in the Donbass region.

Pro-Russian separatists in the region have been receiving military aid from Moscow, and, in the past, were receiving direct help from unmarked Russian troops, in addition to weapons shipments.

Following the most recent breaches of the ceasefire agreement, Pentagon Press Secretary John Kirby stated that the US government is aware of Russian troop movements on the Ukrainian border, which he termed a violation of the agreement.

“Russia’s destabilizing actions undermine the de-escalation in tensions that had been achieved through an OSCE-brokered agreement back in July of last year”, Kirby declared. The Pentagon spokesman also noted that Washington is discussing the Donbass situation with its NATO allies.

On Tuesday, the Ukrainian military chief Ruslan Khomchak cited a buildup of Russian troops near Ukraine’s eastern border. Next day, the Kremlin stated its concern about increased hostility in the east of Ukraine, saying it feared Kiev could trigger another conflict with the separatists.