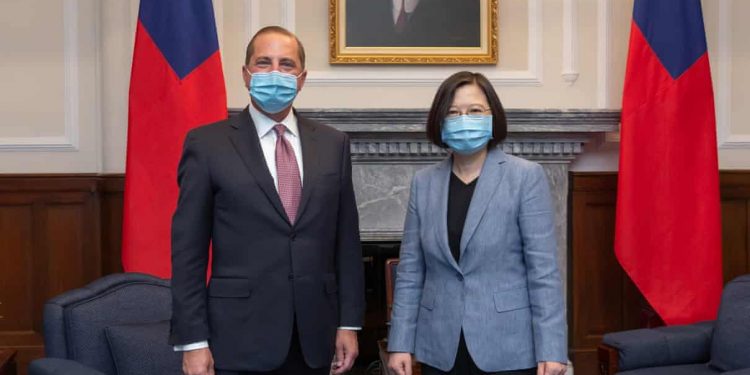 The US health secretary, Alex Azar, has met with Taiwan’s president, Tsai Ing-wen, in the highest-level US visit in more than four decades, pledging “strong support and friendship” from president Donald Trump.

The meeting in Taipei on Monday threatened to escalate worsening tensions between the Washington and Beijing, the latter of whom’s government claims Taiwan is part of the People’s Republic of China, taking issue with any acknowledgement of Taiwan’s status as a sovereign state.

Azar, a US cabinet member, is the most senior American official to visit Taiwan since Washington broke off official ties in 1979 to grant diplomatic recognition to Beijing.

“President Tsai’s courage and vision in leading Taiwan’s vibrant democracy are an inspiration to the region and to the world,” he said.

As China’s relations with the US and other Western countries have deteriorated over the past year, Taiwan has gained more support in the international community with countries supporting Tsai’s calls for his country’s inclusion in the World Health Organization.

While Washington broke off official ties 40 years ago, it has maintained close relations with Taiwan and Trump has ramped up US support for Taipei with arms sales and legislation in the face ofopposition from China.

Increasingly, Taiwan’s democratically elected government is also being held up as a foil to China’s ruling Chinese communist party, which critics say is growing more authoritarian under Xi Jinping. The Covid-19 pandemic has prompted further divisions as some countries blame China’s lack of transparency for the outbreak.

Tsai, who has been branded by Beijing as a “separatist”, said it was “highly regrettable” that China had blocked its participation in the WHO during a pandemic.

Tsai won re-election in January and has received a boost in popularity for her government’s handling of the virus, which has resulted in just seven deaths on the island.