US envoys in Vienna hit by mysterious ‘Havana syndrome’ 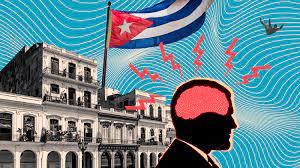 Brussels (Brussels Morning) More than 20 US diplomats, intelligence officers and other officials stationed in Vienna have reported symptoms consistent with the so-called “Havana syndrome”, a mysterious illness attributed to the use of energy weapons.

The Austrian Foreign Ministry confirmed on Saturday that national agencies are cooperating with the US authorities in investigating the matter, Vienna having become the number one hotspot for the syndrome since its first recorded appearance in Cuba in 2016.

The syndrome causes a range of symptoms. These include headaches, nausea, memory loss and cognitive impairment. Affected individuals have been found to have suffered a degree of brain damage from unknown causes. Some of the affected have recovered swiftly. Others have experienced symptoms that last for months. Possible causes suggested ranging from chemical toxins to ultrasound attacks. To date, the most likely explanation is believed to be directed microwave radiation.

A number of US and Canadian diplomatic staff and intelligence personnel around the world have been affected since 2016. The pattern of attacks matches recorded movements of Russian intelligence operatives.

Vienna, a global diplomatic and intelligence hub, currently has more than 158 accredited US diplomats, some deemed likely to be intelligence operatives. The timing of the attacks on US personnel is considered to be significant, since the Austrian capital has been hosting negotiations on the revival of the Iran nuclear treaty. Iran, the five permanent members of the UN Security Council, plus Germany and the EU are participating in the talks.

The Joint Comprehensive Plan of Action (JCPOA), was reached in 2015 to ease sanctions on Iran and ensure the country would not develop nuclear weapons. It became semi-redundant when Tehran chose to ignore its provisions after former US President Donald Trump withdrew from the treaty in 2018, and reimposed sanctions on Iran. The US and Iran are currently negotiating a return to the treaty terms, but progress is hampered as neither side has proved willing to take the first step.