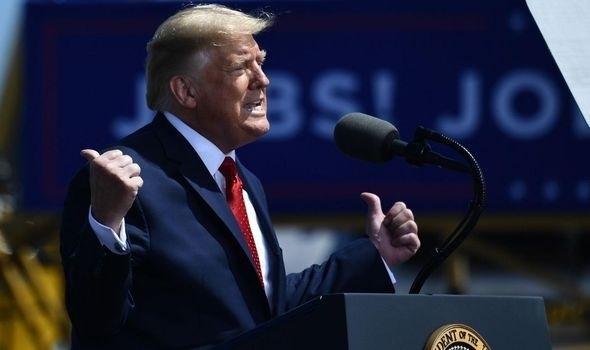 DONALD TRUMP has demanded that he should win the US presidential election because his previous campaign was “spied on” by his opposition.

The US President was speaking at a campaign rally in Oshkosh, Wisconsin, when he claimed he should get “a redo of four years” as president. Mr Trump has coincided his campaigning with the Democratic virtual convention which began on Monday.

During his speech, Mr Trump said: “We’re going to win four more years. And then after that we’ll go for another four years, because they spied on my campaign.

“We should get a redo of four years.”

Mr Trump could have been referring to his previous allegations that Mr Obama’s administration had placed a spy in his 2016 presidential campaign for political purposes.

He first made the accusations in 2018 without providing evidence that his campaign was being spied on by the opposition.

During his rally speech, Mr Trump also made claims that the US’s coronavirus figures “are better than almost all countries”.

The US currently has the highest number of COVID-19 cases and deaths related to coronavirus in the world.

According to the Johns Hopkins University Tracker, the US has recorded a total of 5,435,908 COVID-19 cases.

The data also shows that there have been 170,458 coronavirus related deaths in the US since the start of the pandemic.

Speaking about the coronavirus, Mr Trump said: “They didn’t release it in China but it came to the United States and Europe, 188 countries all over the world.

“But we’re doing great coming back, we’re coming back and our numbers are better than almost all countries I will tell you that.

“Despite what you hear.”

He said: “At the end of Joe Biden’s eight years as Vice President nearly 2million Americans of prime working age had dropped out of the workforce.

“He was by the way a disaster on Swine Flu. He got a horrible rating in Gallup.”

Mr Trump also said that the only way he is going to lose the presidential election is “if the election is rigged”.

Mr Trump won Wisconsin in 2016, helping him secure his presidency.

He added: “This has been an incredible experience getting to know you.

“I’ve been here a lot. We’ve been good for each other.

“We have to win the election. We can’t play games.”