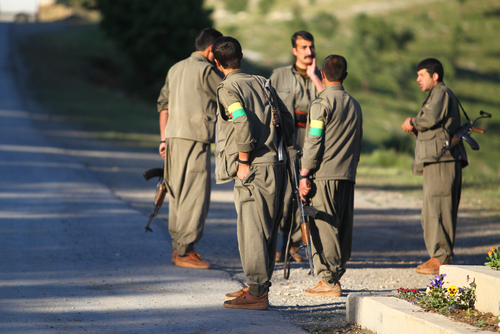 Brussels (Brussels Morning) The US has concurred with the Turkish version of events concerning the 13 Turkish hostages killed in Iraq over the weekend, for which Ankara blames the Kurdish PKK group, Deutsche Welle reported late Monday.

Washington was reluctant to blame PKK at first, confining itself to a mere expression of condolences over the weekend, a reaction that led Ankara to accuse the US of supporting terrorism. In a call between US Secretary of State Antony Blinken and Turkey’s Foreign Minister Mevlüt Çavuşoğlu, Blinken “affirmed the view that PKK terrorists bear responsibility”.

Prisoners in a cave

The 13 Turkish hostages were held prisoner by the PKK in a cave in northern Iraq, but PKK claims the deaths were caused by Turkish airstrikes on the facility. Most of the hostages were soldiers and police taken captive in southeast Turkey, where the PKK has been waging an insurgency since 1984.

Turkish authorities responded to the death of the captives by arresting 718 people in southeast Turkey, accusing them of being a part of PKK. Among those reportedly arrested were members of the pro-Kurdish People’s Democratic Party (HDP), the second largest opposition party in Turkey, which denies being linked to PKK.

Washington initially reacted to the hostage deaths by announcing it would condemn the PKK actions, provided reports of their involvement were confirmed. This triggered a furious public reaction by Turkey’s President Recep Tayyip Erdoğan.

“You said you did not support terrorists, when in fact you are on their side and behind them,” Erdoğan said, denouncing the US in a televised appearance. He warned Washington to act with Turkey “with no ifs or buts” since otherwise the US would be complicit in any murder and bloodshed that might follow.

Hours later, Blinken called Çavuşoğlu to diplomatically concede that the PKK bore responsibility, albeit in a statement that fell short of holding the group directly responsible.

Even though the US considers PKK a terrorist organisation, it has worked with other Kurdish armed groups in Iraq and Syria in the past, despite objections from fellow NATO member Turkey, which views Kurdish efforts at state-building as a direct threat to its territory.