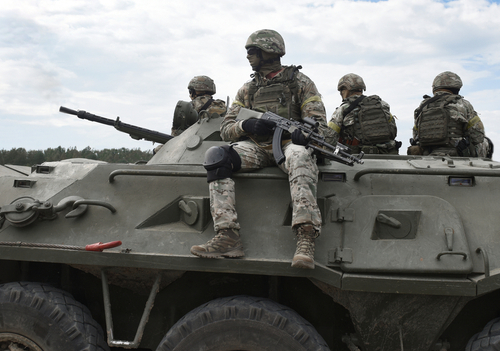 Brussels (Brussels Morning) US Secretary of State Antony Blinken met with his German counterpart Annalena Baerbock in Berlin on Thursday to discuss a joint approach to Russia.

Afterwards, he stressed the importance of NATO members “speaking and acting together with one voice when it comes to Russia”, Reuters reported.

He stressed that hundreds of meetings had been organised about the situation in Ukraine to ensure that NATO members were as one on the issue.

Russia’s deployment of troops near the border with Ukraine is being viewed by some in the West as preparation for an invasion, an accusation Moscow rejects.

“Unity gives us strength, a strength which I must add, that Russia cannot match”, Blinken stated. This was “why we build voluntary alliances in the first place”, he explained.

The talks between NATO and Russia had provided both sides with something to consider, he noted, but “even as we are relentless in pursuing this diplomatic path, we will continue to make very clear that if Moscow chooses the path of further aggression, we will impose swift and massive costs.”

Baerbock echoed the sentiment, saying they were “agreed that the only way out of the crisis is a political one, and the only path to this is through dialogue.”

“This is nothing less than a question of maintaining peace in Europe,” she added, stating that “for us, it is existential.”

Blinken and Baerbock met with Jean-Yves Le Drian, France’s Minister for Europe and Foreign Affairs, and with the UK’s Minister of State for the Middle East and North Africa, James Cleverly, who visited Berlin earlier this week.

The next day, Moscow declared that threatening Russia with severe consequences is not productive and could only make the situation worse.

Russian Presidential Press Secretary Dmitry Peskov aid was much after US President Joe Biden had warned that Russia would face serious consequences if it invaded Ukraine.

Russia’s Foreign Minister Sergey Lavrov dismissed NATO’s calls for unity, maintaining that it is the US that makes the decisions.

On Wednesday, France’s President Emmanuel Macron proposed drawing up an EU plan to ease tensions with Russia. He said, “we should build it among Europeans, then share it with our allies in the framework of NATO, and then propose it for negotiation to Russia.”