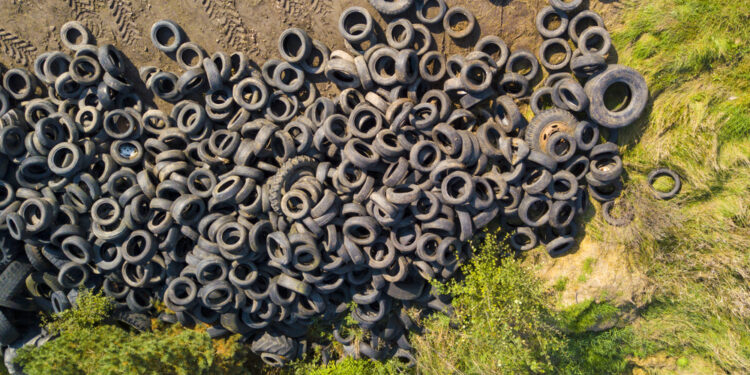 Brussels, (Brussels Morning)- Foresters found 140 car tires in the Sonian Forest, not far from the Rood Klooster. Large loads of car tires were also dumped elsewhere in Flemish Brabant in July. In total, strangers dumped more than a thousand tires a few tens of kilometres apart as reported by BRUZZ.

It was the foresters of Brussels Environment who found 140 car tires at the end of last week in a canal next to the Eikenweg. This road connects the Rood Klooster with the Tervurenlaan. The approach roads to the forest are popular places for illegal dumpers, but Bart Swerts has not yet seen car tires during his fourteen-year career as a forest ranger.

Coincidentally, even more car tire dumps have been found in a month’s time. In the Hallerbos a total of more than a thousand car tires were deposited at three locations. The locations are less than 25 kilometres apart. In Meise, a large consignment of car tires was dumped several times in the vicinity of the Neromhof.

“The damage to nature may not be that bad, but it gives us a lot of work,” says Swerts. “We have been cleaning up with seven people this morning. And I do not include the administration that comes with it to arrange the collection with Brussels Net. That is time that we cannot spend on the essence of our work, the monitoring plantings, for example.”

It is not known who deposited the tires. “It could be someone who collects garage tires under the pretext of taking them to the container park, but then keeps the money and dumps the tires in the forest.”

The forest rangers contacted the police to check the cameras on Tervurenlaan to see if they recognized the licence plate. Fines for landfill in a protected nature reserve range from 62 euros to 62,500 euros for hazardous waste such as barrels of oil.