Union is having a hard time swallowing supporter flow 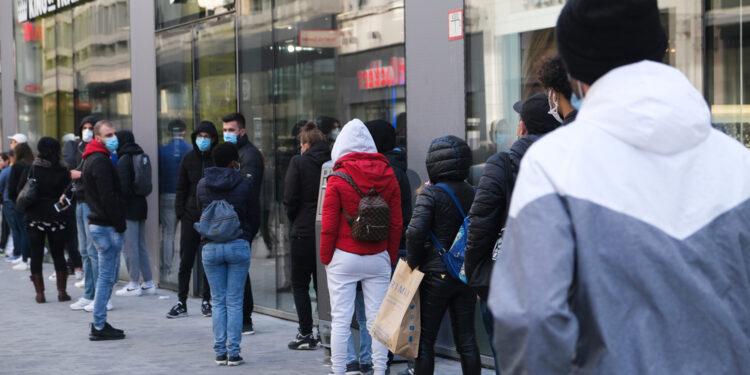 Due to problems with ticket control at the entrance, many Union supporters missed the first part of the play-off match against Anderlecht last Sunday. Drinks sales also cause long lines. The club promises to get better. “But in the long run, a new stadium is the only solution.”

A photo taken from a balcony in the Brusselsesteenweg in Forest shows Union’s capacity problems well. If you want to get to the eastern stand of the Joseph Mariënstadion – the most popular stand for fans – you have to enter through one narrow entrance. It concerns 4,500 people. Now that the club plays in first class and the stadium is always sold out, this causes congestion.

“I started queuing at six o’clock. Twenty minutes longer I had only moved one meter,” Told Emily Deglas of Union Bhoys supporters’ association to BRUZZ. She didn’t make it in time on Sunday for Union Saint-Gilloise’s match against RSC Anderlecht. “I first went for a drink because it was so slow. I was only in the stadium just before Anderlecht scored.” In those first twenty minutes she missed two goals from her home team.

Daan Vermeerbergen, another Union supporter, made it in just in time around half past six. “I had to queue for half an hour. Last season you could just walk in five minutes before the match, so to speak,” he says. “The organisation simply has to improve. Six stewards are standing at the entrance to scan the tickets and it takes them almost 30 seconds per person. You do the maths, with all those people.”

Various supporters share their disappointment about the delay at the entrance via social media. “Missed two goals,” is the general tenor. There are also concerns about safety.

The club clarifies that problems arose with their internet connection on Sunday. As a result, some scanners worked slower or stopped working. Around half past six it was finally decided not to scan or search anyone anymore. “Just opening the gate is not really safe,” fears supporter Vermeerbergen. The club promises to strengthen the internet connection by the next home match. “And we encourage supporters to come on time,” said Union spokesman Maarten Verdoodt.

Still, there are other queues in the stadium. “The drink sales are terrible,” said the supporters. “An order at the three bars quickly takes 40 minutes: almost a full half. That may be good for health, but it means little income for the club,” says Emily Deglas.

Union does not work with rechargeable drink cards, like many other clubs, and without cardboard holders to carry large amounts of beer. “It is bad that we play in the first division, while clubs in the second division can work efficiently,” says Daan Vermeerbergen. He wonders whether Union cannot install automatic gates at the entrance, or provide better flow through gates in the street.

Both options have been ruled out for security reasons, according to the club. “The passage to further entrances must remain open and we are not allowed to use the sidewalks,” said spokesman Verdoodt. The fact that the building is classified makes the installation of automatic gates impossible. “Cardboard drink trays are also prohibited for safety reasons,” said Verdoodt. “The only long-term solution is a new stadium.”

Negotiations are already underway about that new stadium in or around Vorst, but a decision has not yet been made. The Mariënstadion will continue to serve for at least a few more seasons. In the meantime, two more play-off matches are coming up: against Club Brugge on May 8 and against Antwerp on May 22. “They will definitely be better organised,” Union assures. “We have been unlucky now, but we will strengthen our internet network and deploy additional stewards,” says Verdoodt.

The local police zone Brussels South wants to close extra parking spaces in the vicinity of the stadium by May 8, so that supporters buses can pass more smoothly. “It will of course always remain the club’s responsibility to better regulate the influx,” the police concluded.