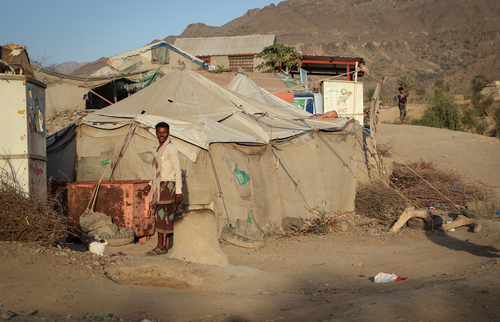 Taiz, Yemen- 04 Feb 2021 : Yemenis who were displaced from their villages after being forcibly expelled by the Houthi militia west of Taiz

Brussels (Brussels Morning) The number of people who have been forcibly displaced from their homes reached a record high in 2020, despite lockdown and travel restrictions imposed by the global response to the coronavirus pandemic. According to the United Nations High Committee for Refugees (UNHCR), more than 1% of the global population is now displaced.

Presenting its annual report on forced displacements for 2020, the UN agency appealed to world leaders to step up their efforts to halt the decade-long trend of growing displacement, driven by violence and persecution. UNHCR called on global actors to help reverse the trend, and to foster peace, stability and cooperation.

UNHCR’s latest figures show that the number of people seeking shelter from wars, violence, persecution and human rights violations grew to 82.4 million in 2020. This represents a 4% increase over the 79.5 million recorded at the end of 2019, which was a record at the time.

This means that approximately 1 in 95 people in the world is currently forcibly displaced – more than 1% of the global population. A decade ago, at the end of 2010, the equivalent figure was 1 in 159 people forcibly displaced.

Of the total figure of 82.4 million displaced, more than half are internally displaced people, accounting for an estimated 48 million. A further 26.4 million are global refugees under the UNHCR mandate and that of the United Nations Relief and Works Agency for Palestine Refugees (UNRWA). The latter currently reports some 5.7 million Palestinian refugees.

The number of asylum seekers in the world grew to 4.1 million. In 2020, Syria and Venezuela accounted for two of the largest upheavals, followed by Afghanistan and South Sudan. Records show that 3.9 million Venezuelans have been displaced abroad.

Turkey hosted the largest number of refugees in 2020, just shy of 4 million, mostly originating from Syria. Colombia was in second place among receiving nations, hosting more than 1.7 million Venezuelans, while Germany was in third place, recording some 1.5 million refugees, nearly half from Syria.