Under the watchful eye of the Smurfs, young children receive their vaccine 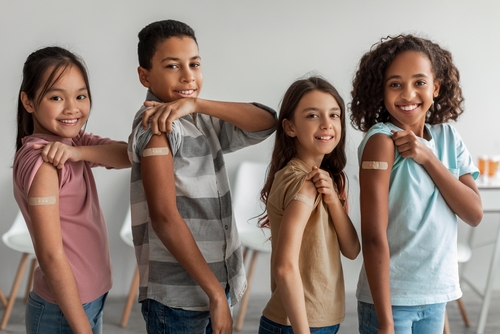 Brussels (Brussels Morning) The vaccination of young children between 5 and 11 years of age started on Wednesday at the Pacheco vaccination center in Brussels. This is done in theme because the Smurfs encourage the children not to be afraid of the injection. This is a pilot project, from the beginning of January the vaccination campaign for young children will really get going in the Brussels Region.

The first jab of the day was for the 11-year-old Henni. But she is far from the only one to receive the vaccine in the coming days. “The parents of children in Brussels can register them via Bruvax or the call center. In the Pacheco center, about 50 children are vaccinated per day. So far there are 650 registrations, which is going smoothly,” notes Inge Neven, head of the Brussels health inspectorate.

According to Bruzz, a few days ago, the Interministerial Conference gave the green light for the vaccination of 5- to 11-year-olds. They receive a pediatric version of the corona vaccine. In Brussels, the switch was immediately made. Thanks to a collaboration with the Smurfs, they are welcomed in a pleasant environment and they also receive a Smurf hug as a gift.

“From January 10, the vaccination of children will also be possible in other centers and we want to get to cruising speed, but we already wanted to test whether everything is going well operationally,” says Brussels Minister of Health Alain Maron (Ecolo).

In the center of Pacheco, the vaccination is supervised by the adjacent Clinic Sint-Jan. Chief physician Kenneth Coenye speaks of a key moment. “Now the children can play their part as citizens and contribute to collective immunity,” he says.

Infection rates in schools fall during 2 weeks before Christmas break

In other news, in the last 2 weeks before the early Christmas holidays, the infection rates in schools have decreased. This is apparent from new figures from the CLBs. Flemish Education Minister Ben Weyts (N-VA) uses the figures to argue again against closing the schools.

The figures have therefore fallen in the period before the cooling-off period for primary education, which saw the Christmas holidays brought forward by a week. “It also seems that the tightened measures in society at large have affected our education,” said Minister Weyts.