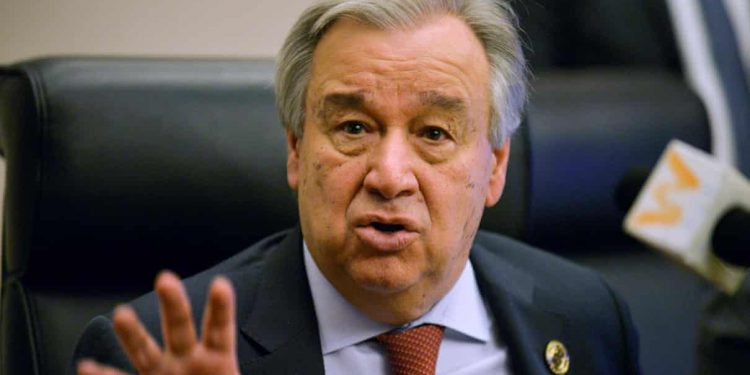 India must swiftly and permanently turn away from coal despite its need for cheap energy, the UN secretary general has urged, aiming to revive global action on the climate crisis as the world begins to emerge from the coronavirus pandemic.

António Guterres told a virtual audience on Friday morning that coal use must be phased out in India, with no new coal-fired power stations after this year, and that fossil fuel subsidies must be ended.

“[Coal] spells stranded assets and makes no commercial sense – the coal business is going up in smoke,” he said. “India can become a true global superpower in the fight against climate change if it speeds up its shift from fossil fuels to renewable energy,” he said.

Narendra Modi’s government has been reluctant to make new commitments on the climate crisis, often taking a combative stance by suggesting that rich nations should shoulder responsibility for emissions while developing countries continue to develop using fossil fuels. The government has continued to promote new coal-fired power generation even as the price of renewable energy has tumbled.

Guterres rejected that stance, warning that Indians themselves would suffer from a continued reliance on coal, in the grim air pollution that blights many of their cities. “Investing in fossil fuels means more deaths and illness and rising healthcare costs,” he said. “It is, simply put, a human disaster and bad economics.”

Wind and solar electricity costs have fallen so much that building new renewable generation is now cheaper than operating 39% of the world’s existing coal capacity, and this will increase to 60% of existing capacity in the next two years, according to the UN. Half of India’s current coal capacity will be uncompetitive against renewables in 2022.

“That is why the world’s largest investors are increasingly abandoning coal – they see the writing on the wall,” said Guterres in the 19th Darbari Seth memorial lecture, held in honour of the founder of the Energy and Resource Institute, a renowned Indian centre of research.

It was the UN chief’s second major intervention in recent weeks aimed at a key emerging economy. Last month he addressed a similar call to the Chinese government, calling for an end to investment in new coal-fired power plants.

“There is no such thing as clean coal, and coal should have no place in any rational recovery plan,” he said in a lecture at Tsinghua University on 23 July. “It is deeply concerning that new coal power plants are still being planned and financed, even though renewables offer three times more jobs and are now cheaper than coal in most countries.”

Guterres wants to revive momentum on climate breakdown that was lost as the Covid-19 pandemic hit. Some nations have reacted to the coronavirus crisis by offering help to stricken industries including fossil fuels and high-emitting sectors such as aviation and car-making, without attaching “green strings” or conditions that would require them to cut emissions.

Governments including China and India have revived plans for new coal-fired power generation as a way to stimulate the economy and create jobs. Energy and climate experts are worried this will lock in high-emissions infrastructure for decades to come and destroy any hope of staving off climate breakdown. The chief of the International Energy Agency, Fatih Birol, warned recently that the world had six months to change direction.

Guterres has also urged rich countries to forsake fossil fuels and forge a “green recovery” as they seek to stimulate their economies amid the Covid-19 recession.

Navroz Dubash, a professor at the Centre for Policy Research in Delhi, said Guterres was right to highlight the worsening economics of coal and benefits of clean energy, but warned that ending coal use in India would be “complex” as the new renewable energy jobs would not be in the same places as existing coal jobs.

“Instead of more targets and pledges, India needs to actively plan to hasten and smoothen the path from coal to renewable energy. This means planning for new livelihood opportunities in coalmining areas to ensure a just transition, ensuring the robustness of the grid, and making sure the costs of transition are not borne by poor consumers,” he told the Guardian. “The secretary general could usefully also call out other countries, including far wealthier countries, who are dragging their feet on a renewable energy future.”

Yannick Glemarec, the executive director of the Green Climate Fund, said: “It is difficult to phase out fossil fuel subsidies, but the low oil price gives an opportunity to phase them out and recycle the subsidies to help soften the impact.”

China and India will be key players at the UN Cop26 summit next year, when all nations are expected to come up with fresh commitments to curb greenhouse gas emissions in line with the Paris agreement goal of holding temperature rises to no more than 2C, which scientists regard as the limit of safety.

Postponed from this year, the Cop26 summit will be hosted by the UK in Glasgow next November, and is seen as a crunch conference to get the Paris agreement back on track. Current commitments under the accord would lead to 3C of global heating, which scientists say would spell disaster.