UN Secretary General to meet Putin and Lavrov in Moscow 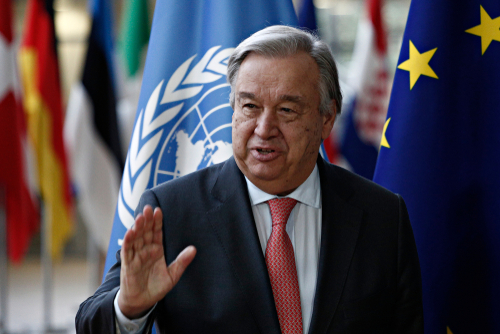 The announcement was made by the Kremlin’s spokesperson Dmitri Peskov, after a letter sent by the UN Secretary General asking to be received in the Russian capital, by Putin, and in Kyiv, by the Ukrainian President Volodymyr Zelensky.

“The Secretary-General said, at this time of great peril and consequence, he would like to discuss urgent steps to bring about peace in Ukraine and the future of multilateralism based on the Charter of the United Nations and international law,” Dujarric said in a statement.

Guterres’ meeting with Zelensky is yet to be confirmed, according to Dujarric, yet the Ukrainian leader has criticized the UN chief for visiting first Russia and not Ukraine.

The Secretary General’s visit to Moscow comes as negotiations between Moscow and Kyiv have apparently stalled, with the sides constantly accusing one another of hampering civilian evacuations, committing war crimes, violating international law and spreading disinformation.

However, Zelensky has threatened to quit the peace talks with Russia should potential independence referendums in the territories controlled by the Russian forces go ahead. “If our people are destroyed in Mariupol, if a referendum, a pseudo-referendum, is announced in any new pseudo-republics of Ukraine, Ukraine will withdraw from any negotiations process,” he said.

As for Russia, it has repeatedly asked NATO not to send arms to Ukraine and stated that it would consider arms convoys to be legitimate military targets. It also says that “pumping up” Ukraine with weapons will only lead to more casualties.

On Sunday, US Secretary of State Antony Blinken and Secretary of Defense Lloyd Austin made a swift trip to Kyiv to meet with Zelensky in a show of support for the leader.

As Zelensky had requested when he announced the visit on Saturday, Blinken and Austin came bearing gifts: $322 million in new military financing and $165 million in new ammunition. Those announcements bring total US military assistance to Ukraine to $3.7 billion since the beginning of the conflict.According to Foreign Policy, US President Joe Biden is expected to request even more Ukraine funding from the US Congress in the coming days, after he warned last week that the initial allocation is already running low.