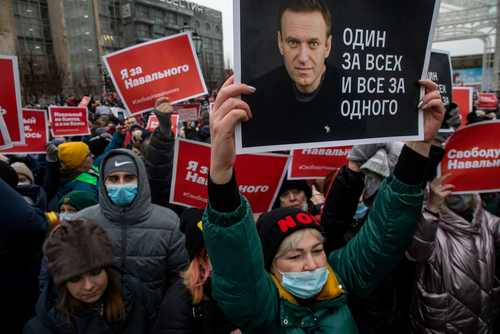 Brussels (Brussels Morning) Two UN human rights experts called for a priority investigation into the poisoning of Russian opposition figure Alexei Navalny, emphasising the urgent need to find out the truth about what happened and to ensure the accountability of those responsible.

“We believe that poisoning Mr. Navalny with Novichok might have been deliberately carried out to send a clear, sinister warning that this would be the fate of anyone who would criticise and oppose the (Russian) government”, the special rapporteurs declared in an official statement. “Novichok was precisely chosen to cause fear”, they added.

These were the conclusions reached by the Special Rapporteur on extrajudicial, summary or arbitrary executions, Agnès Callamard, and by the Special Rapporteur on the promotion and protection of the right to freedom of opinion and expression, Irene Khan. Callamard and Khan had sent an official letter to the Russian government in December 2020. They released it on Monday, after the 60-day confidentiality clause had expired.

“The availability of Novichok and the expertise required in handling it and in developing a novel form such as that found in Mr. Navalny’s samples, could only be found within and amongst State actors”, the UN experts asserted. They based their conclusion on the fact that the presence of the banned nerve toxin variant had been confirmed by toxicology tests conducted in Germany, France, Sweden, and by the Organisation for the Prohibition of Chemical Weapons (OPCW).

The experts noted that Navalny was under intensive government surveillance at the time of the poisoning and that it was therefore unlikely that a third party could have used a banned chemical without the knowledge of Russian authorities.

Callamard and Khan also accused the Russian government of failing to conduct a credible, transparent investigation that would respect international standards. The Russian authorities have failed to respond to the UN rapporteurs’ official letter in the two months since it was submitted.

The rapporteurs ended their letter by calling for an urgent international investigation into what happened and called for his release from prison. In doing so, they reminded the Russian government that it responsible for Navalny’s wellbeing while he is in prison, and that it will be held responsible should any harm befall him.