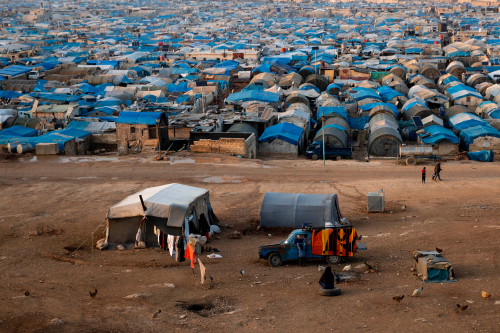 Paris (Brussels Morning) A panel of UN experts on human rights and combatting terrorism has raised the alarm over the dire conditions and increased incidents of violence in northeast Syrian camps hosting internally displaced persons (IDPs) and families of jihadist fighters.

Expressing serious concerns over the situation in the Al-Hol and Roj camps and the need for “collective, sustained and immediate action to prevent irreparable harm to the persons in vulnerable situation held there”, the experts have issued official letters to 57 governments whose nationals are detained in Syria to repatriate them “without delay”.

Under the control of Kurdish forces in the northeast of Syria, Al-Hol is the largest camp for detainees and IDPs in the country, currently hosting over 62,000 people of which more than 80% are women and children. According to ReliefWeb, the picture is similar in Roj camp, which hosts approximately 2,500 people with limited access to basic services such as healthcare and information about the Covid-19 pandemic.

Other than IDPs and Iraqi refugees who fled the battles against the territories held by the so-called “ISIS Caliphate”, the camps host thousands of foreign women and their children, families of the militants originally from European, African and South Asian countries.

The UN Special Rapporteur on human rights while combatting terrorism Fionnuala Ní Aoláin warns of deteriorating humanitarian conditions in at least two Syrian camps where families of extremists are held.

“Thousands of people held in the camps are exposed to violence, exploitation, abuse and deprivation in conditions and treatment that may well amount to torture or other cruel, inhuman or degrading treatment or punishment under international law, with no effective remedy at their disposal”, the rapporteur said.

The report calls on European countries to do more to repatriate their citizens from the camps. The Kurdish forces have also called on foreign governments to transfer detainees, noting that they are unable to hold them indefinitely. Since the US partly withdrew from northern Syria and the Turkish army incursion in Kurdish-held territories in 2019, the situation has become highly untenable.

As part of a plan to improve security and address the unsustainable humanitarian situation, a reform plan was set in late 2020 to enable Iraqi refugees and Syrian IDPs to return to their homes. The intended consequences that only IS-affiliated families remain in the camp and that foreigners are returned to their countries.

But western countries have been reluctant to repatriate extremists’ families, and only a few of them have succeeded in bringing back some of their nationals. Ní Aoláin notes a lack of political will by governments to repatriate “just a handful of detainees” because of their alleged affiliation to the group and security concerns.

Most importantly, she dismissed claims that cooperation with non-state armed groups was not possible to secure their release along with suggestions that wealthy western countries lacked the resources to rehabilitate and reintegrate all those still being held in Syria.

“I would urge those countries to take back their nationals; the SDF, the ‘de facto’ authorities do not want these individuals in their camps, they are pleading for them to be taken home”, the Special Rapporteur said.

In a November 2019 report, the conflict resolution think tank International Crisis Group took a critical tone towards the very limited actions taken by governments to repatriate their nationals.

“Up to this point, most Western governments have done the very least they could get away with in terms of repatriations; they should instead be stretching to do the most” given their greater resources and fewer detainees, notes the report, but adds that “[l]ess apparent is what might make these governments revise the cold calculations by which they have already stranded hundreds of their nationals in Syria’s north east”.

Turkey has also accused the US and EU of being too slow to repatriate their ex-combatant citizens, causing friction among Turkey and its NATO allies and raising fears that IS-affiliated detainees could escape. Several reports have emerged attesting to the reality on the ground.

France24 recently quoted the CAT terrorism analysis centre reporting that 13 French jihadists, including Hayat Boumedienne, the partner of one of the three men who carried out deadly terror attacks in Paris in January 2015, have escaped custody in Syria.

France has already repatriated more than 200 children over the past three years, but its policy of considering every case separately means progress has been slow, often leaving families in despair of reuniting with their children and grandchildren. The Hague-based International Centre for Counter-Terrorism also referred to European countries, such as France, the Netherlands and Austria, taken to court over the slow process and over refusing to repatriate mothers over security and legal process fears.

A future generation of extremists

Several human rights organisations and the UN warn of an increasingly unstable security situation, following the death of at least 12 detainees. While citing tribal disputes as a potential source of the tensions, the camp administration added that at least three people had been decapitated, a sign of extremist violence among the detainees.

Al-Hol is seen by some as the last ISIS stronghold in Syria. In a January report on Al-Qaida and the Islamic State, the UN notes that people held in camps are exposed to indoctrination and radicalisation by remaining jihadist cells, effectively raising the chance of a next generation of extremists being bred in the camps.

Further on, the report expresses concern over recent data collection within the camps, conducted in dubious terms of due process as it excluded humanitarian actors and medical personnel. It is unclear under what conditions it was held, including issues over consent given by women and children, who has access to the data and for what use.

“We fear that this exercise was in fact aimed at identifying third country nationals who may pose a security risk, information that could be further communicated and used by States of origin, as a basis for deciding the further course of action for their nationals. This could include trial and repatriation, or children’s separation from their families, including that of male children for further detention”, the report concludes.