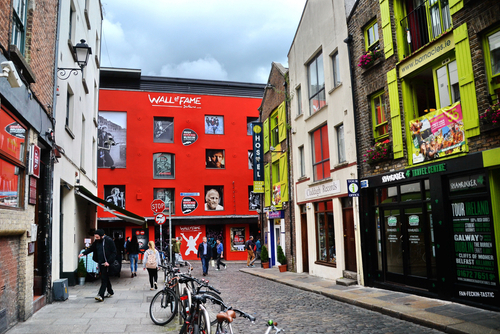 Dublin, Ireland -08-07-2015: Colorful street of Dublin. The Irish Rock 'n' Roll Museum Experience in the background. The Wall is Dublin's tribute to Irish musicians and a photography exhibition.

Brussels (Brussels Morning) Turning the tables on the EU, the UK’s chief Brexit negotiator David Frost claimed that the Northern Ireland Protocol section of the Brexit agreement now poses a threat to the delicate peace in Northern Ireland. For this reason, he explained, the British government might be forced to act unilaterally if the EU refuses to budge from its position on the Protocol.

Despite facing calls from US President Joe Biden to de-escalate the dispute with the EU, UK Prime Minister Boris Johnson announced during last weekend’s G7 summit that Britain would go “all the way”, even threatening to impose emergency measures if no solution is found in the current standoff over the disputed Protocol.

Ddesigned to keep Northern Ireland both a part of the EU common market and the UK customs territory, the Protocol necessitated checks on goods crossing the Irish Sea from Britain to the province, in order to avoid having to create a hard border on the island of Ireland. A hard border would be in breach of the  Belfast Good Friday Agreement.

The 1998 Agreement put an end to decades of sectarian fighting between Catholic Irish nationalists and Protestant unionist paramilitaries, during which more than 3,600 people were killed. Even though the Northern Irish Protocol was negotiated and implemented precisely to preserve the Good Friday Agreement, Frost argued before the Parliament on Wednesday that it is the Protocol that is jeopardising the Agreement.

London’s position is that the Protocol is undermining the consent of one side of the Northern Irish community – the Protestant unionists. Their paramilitary supporters have already sent thinly veiled threats about implementation of the Protocol, which they see as forcing the province closer to unification with the Republic of Ireland.

Frost declined to directly state that Britain would invoke Article 16, the provision in the Protocol that allows either side to take measures to prevent economic, societal or environmental difficulties. Nonetheless, he has indirectly hinted that such a move features in Westminster’s plans. “We are extremely concerned about the situation”, he noted.
Ireland’s Foreign Minister Simon Coveney reacted to Frost’s statements on Twitter, by emphasising that the Protocol, far from representing a threat to UK’s territorial integrity, is an arrangement to manage the disruption to the island resulting from Brexit, to the greatest extent possible.