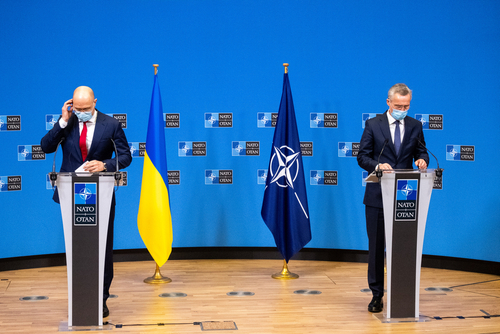 Brussels (Brussels Morning) Ukraine’s President Volodymyr Zelensky said on Tuesday that becoming a member of NATO is the only way to end the conflict in the eastern Donbass region, where pro-Russian separatists have been fighting with government forces since 2014, Deutsche Welle reports.

Zelensky made the statement following a telephone conversation with NATO Secretary-General Jens Stoltenberg. He noted that Kiev has committed to making the necessary defence reforms required for joining the alliance. He hoped Ukraine would be able to join NATO’s Membership Action Plan (MAP) this year, something that would be “a real signal for Russia”.

After Zelensky talked with Canada’s Prime Minister Justin Trudeau later in the day, the president’s office stated that were Canada to “take the lead among allies who support a MAP solution for Ukraine”, it would amount to “an important signal of support from true friends”.

NATO head Stoltenberg, on the other hand, made no mention of any plans for Ukraine to join the alliance, tweeting instead that NATO “remains committed to close partnership” with Ukraine. Stoltenberg did tell Zelensky that NATO had “serious concerns” regarding the buildup of Russian troops near the Ukrainian border.

Russia has long seen expansion of NATO into what it deems to be its sphere of influence as a form of aggression. Kremlin spokesman Dmitry Peskov warned on Tuesday that “people in eastern Ukraine would not accept NATO membership”.

“So far we’re not seeing an intention by the Ukrainian side to somehow calm down and move away from belligerent topics”, Peskov stated. Moscow previously accused Ukraine of re-escalating the conflict in the Donbass region, while in recent days the Organisation for Security and Cooperation in Europe recorded hundreds of ceasefire violations.

The White House remains ambivalent about supporting Ukraine’s NATO membership. President                   Biden’s press secretary Jen Psaki acknowledged on Tuesday that “Ukraine has long aspired to join NATO”, noting that the Biden administration has been discussing the issue. “We are strong supporters of them, we are engaged with them… but that is a decision for NATO to make”, Psaki said.