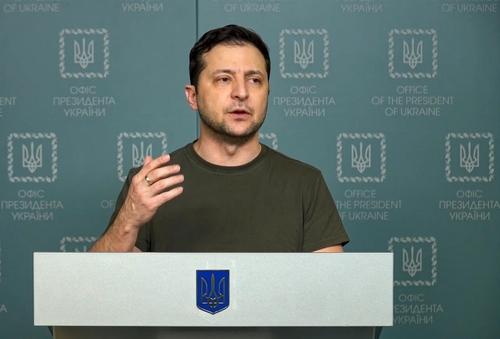 Belgium, (Brussels Morning Newspaper) Ukraine’s President Volodymyr Zelenskyy called for more Western involvement in the war when he addressed the NATO, G7 and EU summits in Brussels today. He urged Western countries to take “serious steps” to help Ukraine defend against Russia, including the enforcement of a no-fly zone, Reuters reported.

While Western leaders promised to provide more aid to Ukraine, EU representatives cautioned that imposing more severe sanctions against Russia was unlikely, while NATO Secretary General, Jens Stoltenberg, reiterated that the alliance would not deploy troops or send combat aircraft to the country.

“At these three summits we will see who is our friend, who is our partner and who sold us out and betrayed us”, he stressed.

NATO representatives announced that they would send more equipment to Kiev to defend against nuclear, chemical and biological attacks.

“Putin’s steps are made to make us afraid as well so it deters us from helping Ukraine… we should definitely not fall into that trap”, Estonia’s Prime Minister, Kaja Kallas, stated, adding that it was very important to all that “Putin can’t win this war…”

According to UN data, nearly one quarter of Ukraine’s 44 million citizens have been displaced, with more than 3.6 million Ukrainians having fled the country.

NATO’s Stoltenberg described the war in Ukraine as the “most serious security risk in a generation” and concluded that “as long as we stand together we are safe.” He believed Ukraine to be strong and the West unified, stressing that “Putin has made a big mistake” by attacking the country.

NATO has reinforced its presence in Eastern Europe and has roughly 40,000 troops deployed from the Baltic to the Black Sea, with alliance members planning to deploy more troops to Bulgaria, Hungary, Romania and Slovakia.