UK warns EU it could deviate from NI Protocol 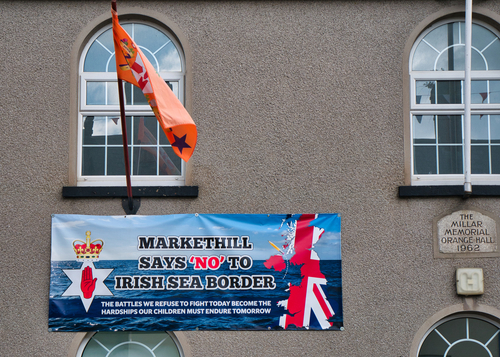 Brussels (Brussels Morning) The UK is preparing to threaten the EU that it will deviate from the Brexit agreement’s Northern Irish Protocol if Brussels proves unwilling to “show more flexibility” about checks on goods coming into the province from mainland Britain.

Citing a source within the UK government and three EU sources, Reuters reports that Britain’s chief negotiator with the EU, David Frost, is getting ready to announce a significant change in the existing protocol, a move that may have far-reaching consequences.

Speaking to the British Parliament, Frost told MP`s that the Protocol is unsustainable, and that “all options are on the table” when it comes to changing the controversial part of the Brexit treaty.

The Protocol was originally devised to prevent the creation of a hard border on the island of Ireland, which would represent a breach of the 1998 Belfast Good Friday Agreement, something London and Brussels wanted to avoid. However, maintaining the border arrangement between the Republic of Ireland and the British province of Northern Ireland meant the need to introduce customs checks in the Irish Sea.

With Northern Ireland de facto remaining a part of the EU single market, British meat and other exports would have to become subject to the veterinary checks required for third-country imports, a stipulation that threatens the regular supply chain for supermarkets in the province.

London provoked the ire of Brussels by unilaterally extending the grace period on checks for certain goods, prompting the EU to launch an infringement procedure against the UK. In the negotiations that followed, the EU’s chief negotiator, European Commission vice president Maroš Šefčovič, announced a three-month delay on such checks, urging London to either consider a Swiss-style deal on veterinary products, or to find an alternative means of supplying the province.

Facing pressure from Protestant British loyalists in Northern Ireland, who claim that introducing checks in the Irish Sea represents a breach of the Good Friday agreement, and fearful of a return of sectarian unrest in the province, the UK is reportedly still seeking a route to ease or bypass the Protocol’s requirements entirely.

According to the EU diplomats cited by Reuters, Frost will threaten unilateral action over the Protocol, unless Brussels proves ready to compromise, even though EU sources claim that renegotiating the Protocol is out of the question.

Frost is expected to call for a reciprocal deal on veterinary rules, proposing that less stringent criteria be applied, while also seeking the removal of the European Court of Justice (ECJ) from the arbitration process, something the UK previously accepted as part of the Brexit agreement.