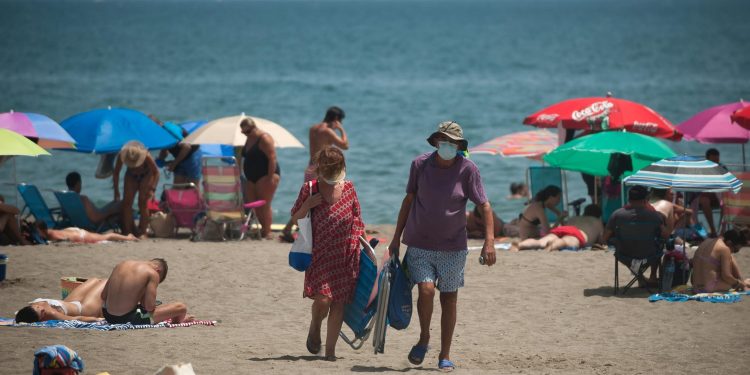 The results come as the industry continues to face cancellations and redundancies, after Spain was removed from the UK government’s travel corridor list on 26 July. The World Travel and Tourism Council (WTTC) has forecast 3 million job losses across the UK tourism sector with “uncoordinated” restrictions deterring travellers.

The survey also found that 93% would cancel if quarantine was required on arrival in their holiday destination. Rules on quarantine measures and masks vary from country to country, and can change without warning, as spikes in some regions result in restrictions and safety measures being reinstated. Travellers are being advised to carry a mask at all times, and be prepared to wear it in public and in some hotels.

Across France, fines can now be imposed for not wearing a mask in places such as parks, markets and city centres; wearing one is already mandatory in enclosed public spaces and shops. Belgium, Italy, Germany, Spain and Turkey have also made it mandatory in many public spaces, but enforcement and fines vary.

In the Netherlands, masks are compulsory only on public transport; it’s the same in Portugal, Switzerland and Greece – Greece also requires masks in medical facilities and lifts, while they are only “strongly recommended” elsewhere in public. Across the majority of the Nordic region, Estonia and the Czech Republic, masks are not compulsory, but advisable for situations where you cannot socially distance.

The UK government changed its advice for Spain on 25 July – with all arrivals to the UK from the country now facing a 14-day self-isolation period. Many tour operators and airlines subsequently axed swathes of holidays and flights planned for the coming weeks.

Jet2 has cancelled all flights to mainland Spain and the Balearic and Canary Islands until 17 August. Tui has cancelled all UK holidays to the islands until 10 August and to mainland Spain until 17 August – but has added more flights to Greece and Turkey. EasyJet expanded its summer schedule across the rest of Europe after a surge in demand as holidaymakers switched away from Spain.

EasyJet chief executive Johan Lundgren called for a more nuanced approach to quarantine, however: “We urgently need to target quarantine requirements to where spikes have occurred rather than at national level.”

The WTTC has forecast that the pandemic could cost nearly three million tourism jobs in the UK, and 197 million in the sector globally if barriers to global travel, such as a mishmash of quarantine measures and anti-travel advisories, remained in place.

WTTC chief executive Gloria Guevara said this week: “It’s heartbreaking to see our worst fears for the UK and global travel and tourism sector coming true. While we acknowledge the UK government’s efforts to support travel and tourism during this crisis, the UK alone looks set to lose three million jobs in the sector, creating an economic black hole of £142bn in the country’s finances. This is due to an international failure to implement proper coordination to combat the pandemic.”

In contrast with the YouGov poll, the WTTC believes masks would encourage more people to travel, if rules were consistent across the world. Guevara said: “We still have time to turn this around if we act together now and replace ineffective quarantines with comprehensive rapid testing, a worldwide accepted standard of contact tracing and widespread face mask usage. Employing the latest technology, combined with mass adoption of protective face coverings, will help restore confidence to the traveller.”

One of the most recent companies to face cuts is Hays Travel, which announced this week that it was in consultation on almost 900 redundancies. The company took on more than 2,000 Thomas Cook employees when the venerable firm went under last October, but have said that they “had no choice” following the government’s decision to advise against travel to Spain, and with imminent changes in furlough conditions.

Owners Irene and John Hays said on BBC Breakfast on Tuesday: “There’s clear evidence that just before a week ago last Saturday [the day before rules for Spain changed] the figures were coming back steadily and we were really pleased with the return of new bookings – not just for 2021, where we’re actually performing quite strongly, but steadily coming in for summer 2020, which would have helped recover the position in terms of staffing.

“We believe a more nuanced approach would be more appropriate. The Canaries and Balearics have low infection rates. We believe the government could still change that and we could recover the summer.”