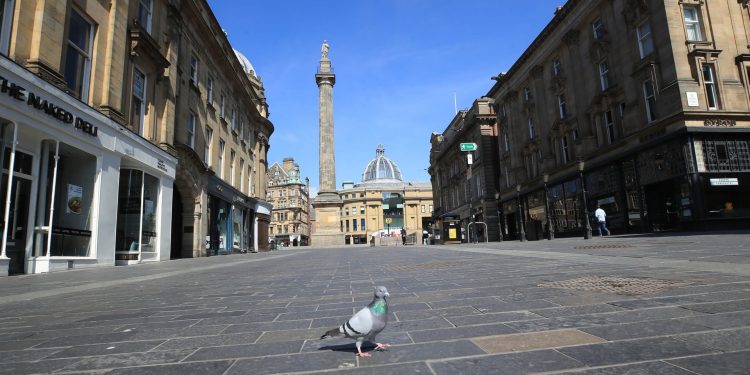 Britain’s economy will be officially declared in recession this week for the first time since the 2008 financial crisis, as the coronavirus outbreak plunges the country into the deepest slump on record.

Figures from the Office for National Statistics on Wednesday are expected to show gross domestic product (GDP), the broadest measure of economic prosperity, fell in the three months to June by 21%.

After a decline of 2.2% in the first quarter, the latest snapshot will confirm the UK economy slid into recession after the outbreak spread in March and the government imposed a nationwide lockdown to contain the pandemic. Economists consider two consecutive quarters of shrinking GDP as the technical definition of a recession.

Confirmation of the Covid-19 recession this week will come as the government tries to strike a balance between relaxing lockdown restrictions to kickstart growth, while also needing to prevent a severe second wave in infections. After four month of harsh controls, growing numbers of companies are coming under severe financial stress, with job losses steadily beginning to mount. Some localised restrictions are also being launched as infections rise.

The US and the eurozone have already been confirmed in recession as the global economy grapples with the sharpest downturn since the Great Depression of the 1930s. However, China, at the heart of the original outbreak, avoided recession after the world’s second-largest economy returned to growth in the second quarter.

The slump in Britain is expected to outpace the decline in other major countries, in the biggest quarterly drop of any G7 economy due to a later launch of lockdown controls and slower removal of harsh restrictions than elsewhere.

The Bank of England said last week the economic fallout from the pandemic could be less severe than initially feared, despite sounding the alarm that the bounce-back would take longer. It also warned lasting damage will be caused amid a sharp rise in unemployment.

Garry Young, deputy director of the National Institute of Economic and Social Research (Niesr), said it could take Britain longer to regain its pre-pandemic growth trajectory than hoped. The thinktank estimates GDP will not return to the level recorded at the end of 2019 before coronavirus struck until the second half of 2023.

“A rapid V-shaped recovery is a possible outcome still, but all the risks seem to be to the downside. If we get another wave of the virus and have to do more widespread lockdowns, that’s going to knock the economy off that V path,” he said.

Britain’s economy was struggling for momentum before the pandemic struck, as Brexit uncertainty and the December general election dragged down business investment and consumer spending. GDP failed to grow in the fourth quarter of 2019, long before coronavirus spread.

Monthly figures for the economy indicate growth returned in May as lockdown controls were gradually lifted and pent-up demand fuelled a boom in consumer spending. Economists will be looking for further evidence of the recovery taking hold in June with the latest growth figures on Wednesday.

GDP is expected to increase by 8% on the month, as factories resumed production and the reopening of non-essential shops spurred consumer spending.

Despite the economy returning to growth, unemployment is beginning to rise as the government scales back its its furlough wage subsidy scheme while demand for goods and services in the hardest-hit sectors – such as hospitality and leisure – remains significantly below pre-pandemic levels.

Sanjay Raja, an economist at Deutsche Bank, said: “There are plenty of downside risks to the economy: more local lockdowns, a slower external backdrop, Brexit uncertainty and rising unemployment, to name a few.”