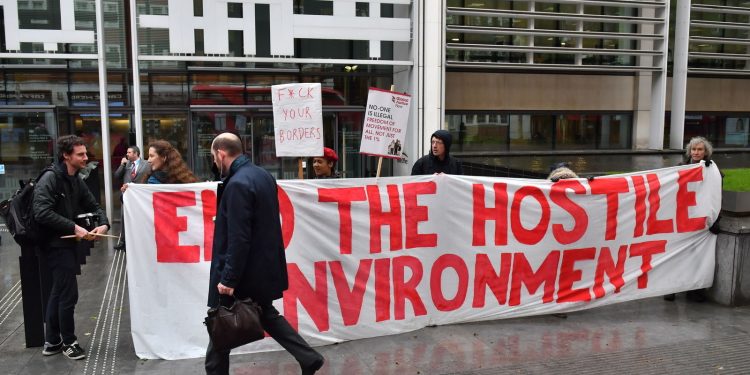 London (Brussels Morning) The UK government has put aside around £28 million (€30.1 million) to contract private sector suppliers of transport, housing, health, and legal services to deport migrants from the UK and reintegrate them back into their country of origin.

Politico revealed the “early notification” from the government to potential bidders, found on Tussell Insight, a database of government contracts.

The contracts would “provide reintegration services for people returning from the UK to their countries of origin”, running between April 2021 and April 2024.

The notice also reportedly stated that a small number of service users would be voluntary returns while most would be forced removals.

Services could include airport pickups on arrival and travel, medical support, cash, phone advice on getting access to education and finding work.

Family tracing support was also cited as a service that would be sought for in a forthcoming invitation to tender.

Politico also reported that the notice specified other support, such as helping set up a business or finding training opportunities while funding interim living costs.

Contracts may be divided according to geographic region.

Campaigners are wary, however, that outsourcing such services to private companies could follow a precedent of harm.

“Outsourcing the safety of migrants to private companies is no way to run a safe immigration system”, said policy director for the Joint Council for the Welfare of Immigrants Chai Patel, speaking to the media outlet.

“Time and time again we see appalling abuse, neglect and even deaths of people at the hands of corporations that put profits before human lives”, he said.

“The government must be directly accountable for the safety of the people it deports and detains”.

The Home Office spokesperson responded to the Politico report saying the UK was already providing support for returnees, including voluntary returns and that they were exploring future options.

“These options will help those returning to re-establish their lives in their countries of origin, with the ultimate aim of helping to prevent illegal migration to the UK”, they said.

Returns are first being considered to a number of nations across Asia, the Middle East, Europe, the Caribbean and Africa, including Afghanistan, Albania, Sudan, Iraq, and Jamaica, among others.