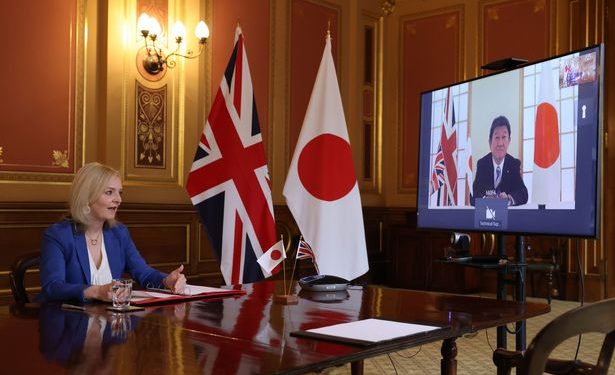 Amid the backdrop of the UK and EU negotiating process, an agreement was struck between British and Japanese ministers Friday.

“This is a historic moment for the UK and Japan as our first major post-Brexit trade deal,” said Liz Truss, Secretary of State for International Trade.

“The agreement we have negotiated – in record time and in challenging circumstances – goes far beyond the existing EU deal, as it secures new wins for British businesses in our great manufacturing, food and drink, and tech industries.”

Japanese Foreign Minister Toshimitsu Motegi said despite difficulties, “we managed to reach an agreement in principle with extraordinary speed, in just three months”.

Trade negotiations have been one of the biggest challenges for the UK, with pressure to reach favourable agreements before the end of the transition period. Talks are underway with various partners, including Canada and the US and its negotiations with the East Asian island have been ongoing since June.

While most aspects of the accord were agreed in August, final sticking points remained on tariffs for cheese and farm imports from Britain. According to Japan Times, the agreement lets Tokyo mitigate the UK potentially raising tariffs on imported Japanese vehicles after it leaves the EU. The deal in large part follows the Japan-EU agreement from last year.

The UK said the deal increases trade with Japan by almost €16.5 million and that 99 percent of its exports there would be tariff-free. It also hailed the accord’s digital and data provisions that went “far beyond” those in the agreement between the EU and Japan, helping British fintech firms operating in the country.

Business groups also welcomed the deal. The Institute of Directors’ Head of Europe and Trade Policy, Allie Renison, said, “We hope the spirit of both ambition and compromise will help land further continuity deals, such as with Turkey and Canada, as well as an agreement with the EU”.