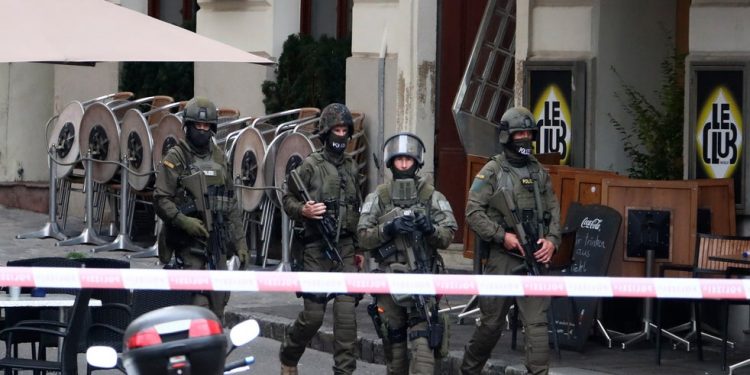 London (Brussels Morning) The UK’s terror threat level has been raised to ‘severe’, which means an attack is “highly likely”, although there is no specific intelligence that one will occur.

Home Secretary Priti Patel said Monday, “The British public should be alert but not alarmed”, calling the move a “precautionary measure following the terrible incidents we’ve seen in France last week and the events we saw in Austria last night”.

On Monday, a terror attack in Vienna, Austria, resulted in four people dead and many more injured as a 20-year-old male, described as a jihadist, opened fire at six different sites in the capital.

The incident followed two attacks in France last month, including a knife attack in the church Notre Dame in Nice and the killing of teacher Samuel Paty in Paris.

Elsewhere, an attack on Kabul University was claimed by ISIS, creating at least 22 fatalities, on Monday.

Patel also noted there would be “more visible policing across the country”, urging people to report anything of concern to the police.

The terror threat level has been at ‘substantial’ for around a year, although security sources told Sky News that it was in reality at the upper end of the alert, with the Vienna incident tipping it over the edge.

It had been at ‘severe’ for five years before November 2019 and reached ‘critical’ — the highest threat level — after a bomb attack at a tube station in September 2017.

The decision to escalate was taken by the Joint Terrorism Analysis Centre (JTAC) based at MI5 headquarters.

There are two other terror threat levels in the UK: low and moderate, meaning an attack is highly unlikely or possible, but not likely.

The new warning will mean that analysts and security will be taking a closer look at terror suspects, taking into account how other global incidents could be relevant to their aims.