by Sophia Akram
in Uncategorised 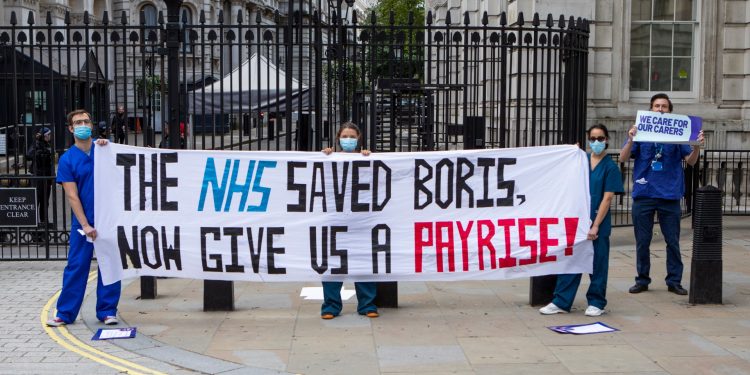 London (Brussels Morning) The UK chancellor Rishi Sunak is expected to outline as part of his spending review next week a pay freeze on all public sector salaries in line with inflation.

Only frontline NHS doctors and nurses would be exempt from the measure as recognition to their work during the pandemic.

All other public sector employees, including teachers, police, the armed forces and civil servants are likely to see a face the pay cap.

Sunak has already received criticism for over anticipated cuts to the earmarked 0.7 percent GDP target for overseas aid, while earlier this week it was confirmed that the UK defence budget would receive a 16.5 billion pound boost over four years.

Sunak has said that there has to be “restraint” in forthcoming public sector pay settlements and that any awards should take into account the “wider economic context”.

The Centre for Policy Studies (CPS), a think tank influenced by free market principles, has released a report that appears to support the rationale of the measure by saying private sector workers had fared worse from the economic fallout of the crisis.

In its report, Public Sector Pay: The Case for Restraint, it argues that a three-year freeze could save 15.3 billion pounds with an exemption for the NHS.

Unions, however, have said that it was public sector workers who were badly hit from years of Conservative austerity following the economic downturn.

In a response to the report, Unite the Union said, “It is feared that the think tank is acting as an outrider for chancellor Rishi Sunak as he prepares to unveil the public spending review next week”.

“For the last nine months of the pandemic, public sector workers have kept the NHS running, the schools open and refuse being collected – these are the very same workers who have had their pay held down in real terms during a decade of Tory austerity”, it continued.

“At the same time, there is a need to control public spending and reduce the structural deficit which the pandemic is likely to have opened up”.