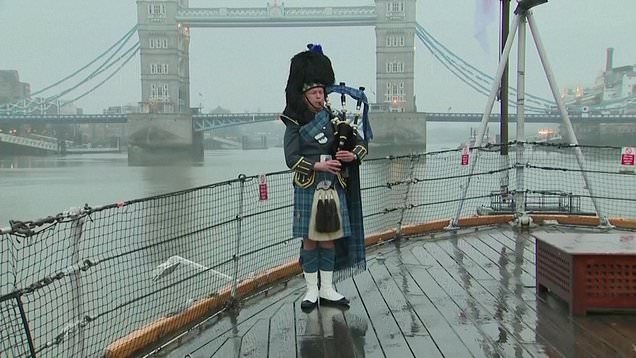 The 75th anniversary of VJ Day – the victory over Japan which signalled the very end of the second world war – has been commemorated with a series of events honouring those who fought in east Asia.

A televised remembrance service took place at the National Memorial Arboretum in Alrewas, Staffordshire, where a two-minute silence at 11am was led by the Prince of Wales and the Duchess of Cornwall.

Boris Johnson read the exhortation before the silence, which was followed by a flypast by the Battle of Britain Memorial Flight over the arboretum.

Victory over Japan was declared on 15 August 1945, when the emperor Hirohito addressed his people and told them to stop fighting. The formal surrender of Japanese forces came on 2 September that year, the date traditionally commemorated by the US.

The day began with a piper playing Battle’s Over at the Imperial War Museum’s HMS Belfast in London at sunrise, as part of a tribute entitled Waking Up to Peace.

The defence secretary, Ben Wallace, was joined by military chiefs as he laid a wreath at the Cenotaph in London on Saturday morning.

Charles and the duchess laid poppy posies and wreaths at the Kwai Railway Memorial, while veterans looked on from nearby benches in order to maintain social distancing.

The Covid-19 pandemic has meant tributes to mark the landmark anniversary have been organised online and on television, with the Duke of Cambridge to appear on screens across the country in VJ Day 75: The Nation’s Tribute, a pre-recorded BBC programme filmed at Horse Guards Parade.

Shortly after 10am, the BBC broadcast the Friendship of Nations, which included 10 world leaders paying tribute to all who served. They included the Malawian president, Lazarus Chakwera, the Nigerian president, Muhammadu Buhari, and the Australian prime minister, Scott Morrison. The Canadian prime minister, Justin Trudeau, Donald Trump and Johnson also delivered remarks.

Johnson said: “On this 75th anniversary of the end of the second world war, we pay tribute to the heroes deployed thousands of miles away in the mountains, islands and rainforests of Asia.

“Unable to celebrate the victory in Europe, and among the last to return home, today we recognise the bravery and ingenuity of those who, in the face of adversity, restored peace and prosperity to the world.

“Their immeasurable sacrifice changed the course of history and at today’s commemorations, we take the opportunity to say what should be said every day – thank you.”

The Labour leader, Keir Starmer, has also paid tribute to those caught up in the conflict, saying they “gave so much, not only to defend our country but for freedom across the world”.

Starmer said: “The conflict in the Pacific and south-east Asia was particularly cruel and saw many British, Commonwealth and allied troops lose their lives fighting for a better world and a better future.

“On behalf of the Labour party, I want to pay tribute to the wartime generation, who through the horrors of conflict showed us the spirit and determination that we need to always remember and always be grateful for.

“It’s important that as we face the challenges of today, we take inspiration from that generation. Through their community spirit and their bravery and their determination for a better world, they’ve shown us what we can achieve when we pull together.”

The RAF’s Red Arrows scheduled a UK-wide tour with flypasts to take place over the four nations’ capital cities. However, due to poor weather the flypast, over Edinburgh was cancelled, the Ministry of Defence said.

Instead, the Red Arrows flew over Glasgow Prestwick Airport, where the aircraft landed to greet three second world war veterans.

In London at around 5.30pm, the Red Arrows are scheduled to fly directly over the Royal Hospital Chelsea, home to three Burma Star recipients, with Chelsea Pensioners to gather in front of the hospital to watch the Hawk jets as they fly overhead.

In a special message, the Queen and the Duke of Edinburgh – who himself was aboard HMS Whelp in Tokyo Bay as the Japanese signed the surrender aboard USS Missouri on 15 August, 1945 – gave “grateful thanks” to all those who fought for the allied nations.

In a statement, the Queen said: “Prince Philip and I join many around the world in sending our grateful thanks to the men and women from across the Commonwealth, and allied nations, who fought so valiantly to secure the freedoms we cherish today.”