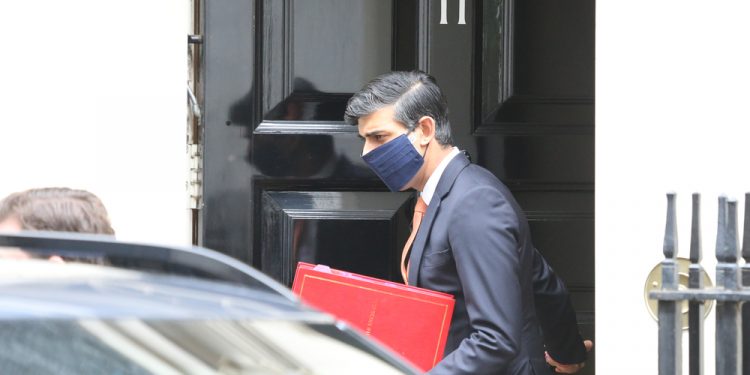 London (Brussels Morning) UK chancellor Rishi Sunak today announced the government’s much-awaited spending review, disclosing some of the dire stats to hit the country since the onset of the pandemic.

Sunak warned the “economic emergency” brought on by COVID-19 had not even begun as it was revealed that borrowing would increase to 400 billion pounds this year, creating the biggest deficit since the second world war.

“Our health emergency is not yet over. And our economic emergency has only just begun”, Sunak told MPs.

“Our immediate priority is to protect people’s lives and livelihoods.”

The UK’s economy is anticipated to contract by a record 11.3 percent this year, although it is expected to grow by 5.5 percent in 2021, according to Sunak.

Some of the cuts announced today to help fill the treasury’s black hole include a freeze on public sector pay, bar frontline NHS staff and low-income workers who are due to receive a pay increment.

The minister also announced a raft of packages to help boost recovery, including a four billion-pound infrastructure fund and the national ‘living wage’ is due to increase by 2.2 percent, with the eligible age for the mandatory baseline being lowered to 23 from 25.

The health budget is also due to rise by 6 billion pounds.

The overseas aid budget did not, however, survive the round of cuts with the Conservative cabinet member confirming speculation the ringfenced 0.7 percent of gross national income will be cut to 0.5 percent, expected to save around 4 billion pounds.

“Many in our country face severe challenges as a result of the pandemic and I know the government must make very difficult choices in response”, wrote Sugg in her resignation letter, “But I believe it is fundamentally wrong to abandon our commitment to spend 0.7 percent of gross national income on development.

“This promise should be kept in the tough times as well as the good. Given the link between our development spend and the health of our economy, the economic downturn has already led to significant cuts this year and I do not believe we should reduce our support further at a time of unprecedented global crises”.