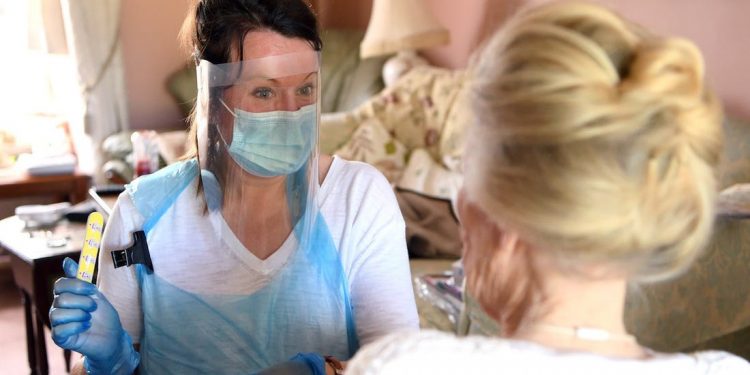 Reports suggest testing in care homes will take a backseat while NHS testing is prioritised, although it is broaching capacity.

The Guardian reported that delays with COVID testing in NHS hospitals had impacted patients’ discharge times and potential procedures.

“It has been mooted in our area that the NHS has to come first and it is having real difficulties”, one local official told the UK outlet.

The official went on to say the “concerning” proposal to reduce testing in care homes could hinder the identification of outbreaks.

These concerns have been reportedly raised across several England local authorities.

Dido Harding, head of the new National Institute for Health Protection and NHS Test and Trace, has said testing will be prioritised for hospital patients, followed by care home workers, care home residents and NHS staff.

The Department of Health and Social Care said there had been no change to this prioritisation schedule with no plans to alter it. It added that 120,000 tests are given to care homes each day, with preference to outbreak areas.

At the same time, there is rising apprehension over testing capacity in the NHS.

The Guardian further reported that one health authority expressed concern that a dearth in reagent chemicals for test processing meant a delay of around three days, risking patient safety.

Jeremy Hunt, the chairman of a parliamentary select committee on health, iterated the need for more reagents recently and urged for more support from the government.

Targets for NHS testing capacity are to reach 100,000 a day at the end of October and 500,000 daily for the NHS test and trace community testing. Two hundred and sixty thousand tests have been administered daily as of the week ending 23 September.

Private tests are now being trialed to return results within 45 minutes so residents can receive family visits once more.