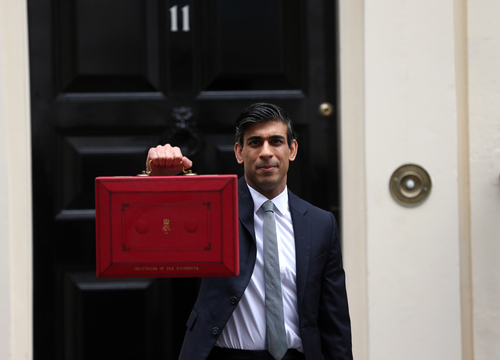 London, United Kingdom - March 03 2021: Chancellor of the Exchequer Rishi Sunak leaves 11 Downing Street with the red dispatch box ahead of revealing the budget in the House of Commons.

London (Brussels Morning) The UK finance minister Rishi Sunak announced Wednesday the much anticipated Budget statement for 2021, laying out a roadmap to help the country recover after the COVID-19 crisis has created some of the worst economic impacts outside wartime.

Speculation prior to the announcement, delivered in the House of Commons this afternoon, revolved around the extension of support measures that have been a lifeline for Britons since the onset of the pandemic, including the government subsidised job retention scheme and the weekly 20-pound increase to Universal Credit — a welfare allowance for those out of work.

Tax increases to aid broader economic recovery and offset high levels of borrowing were also expected. Some also queried whether anything would come of a floated windfall tax, compelling companies who have done well from the pandemic to give back.

Prior to his statement, Sunak relayed top lines from the Office of Budget Responsibility’s (OBR) economic forecasting, painting a more optimistic picture than initially predicted.

Unemployment will also peak at 6.5% this year, less than the 7.5% previously envisioned, providing a less dismal vision for workers.

In his statement, Sunak outlined measures he said would protect jobs and livelihoods, help rebuild the economy and also place the UK on a competitive footing, particularly now as the UK sits outside the EU.

Some of the budget highlights include:

Sunak credited “10 years of Conservative policy for building fiscal resilience” in the country, citing three principles around its fiscal decision-making: that the government should not be borrowing for public spending in normal times; debt should not rise unchecked in the medium term; and that it is sensible to take advantage of low interest rates to help build capital projects.

“Our response has been fair with poorest households benefitting from interventions”, he said.

To those ends, Sunak said there would be a freeze on personal income tax but there would be higher corporation tax in 2023 with a smaller business rate tax also in place.

However, a super deduction would be available for those businesses that chose to invest, calling it the “biggest business tax cut in history”.

Green investment also formed a central message in the budget as well as more commitment to a more ambitious vaccine and science programme.

The leader of the opposition Keir Starmer criticised the budget statement as “not ambitious enough”, and a premature “victory lap” from the Chancellor.

This budget “papered over cracks rather than rebuild the foundations” of the economy, said the Labour leader.

He also highlighted that he “heard nothing about a long term plan to fix social care” and that the country went into a crisis with 100,000 less health sector jobs and underfunded social care infrastructure.

Starmer also said more that needed to be done on addressing the “deep rooted social security inequality” in the country and investing in the national health service, saying the six-month extension of the universal credit top-up fell short.

“Not a single mention of social care in the Chancellor’s speech. Ignored for a decade, abandoned without PPE or testing at the start of the pandemic, under-paid & under-funded”, said Labour MP Helen Hayes, “When will the Tories wake up to the needs of this vital sector which millions rely on every single day?”

“Today’s Budget will help many small firms with their final push through to September, but there is little here to aid job creation or help people return to work”, said Mike Cherry, Chairman of the Federation of Small Businesses.

“Ensuring the newly self-employed can now access support marks a big step forward — we’re pleased our campaign has been heard — but directors who appear to have been left out yet again, will be incredibly disappointed”, he continued.

The aviation industry also felt ignored in the measures:

“Aviation has been the hardest-hit sector in the pandemic, but the Budget is blind to the impact of the near-complete shutdown of international travel”, said AOA boss Karen Dee.

Others have hailed the budget, however, for “backing tech” and for balancing short and long-term needs.

“To be successful in politics, you have to ride two political horses simultaneously”, said Frank Field, a member of the House of Lords, former Labour party politician and now independent.

“Rishi has done a budget for the hour and made the possibility of long-term prosperity to fight the next election. Best budget in my 42 years in politics”.