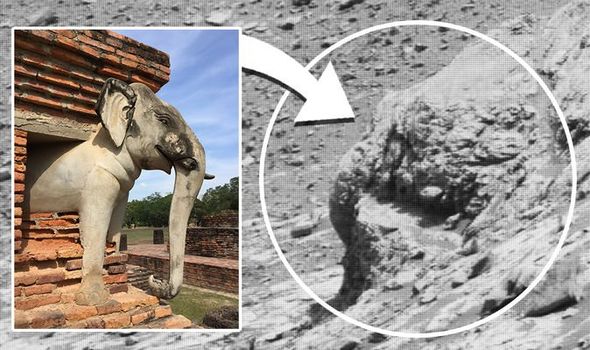 NASA photos of what appear to be “elephant heads” on Mars have convinced a UFO hunter aliens are real.

Self-titled UFO researcher Scott C Waring presented his bizarre theory after trawling through images snapped by NASA‘s Mars Curiosity rover. Mr Waring is convinced this is the second time an elephant-like statue has been spotted on Mars. And despite all evidence pointing to the contrary, the UFO hunter is certain intelligent aliens are hiding away on the Red Planet.

Mr Waring’s latest discovery is a photo snapped by the Curiosity rover on Sol 2765 – the 2765th Martian day of its mission.

The photo features an oddly curved rock that could, at first glance, be mistaken for an elephant trunk.

In Mr Waring’s opinion, it is an elephant statue carved into the Martian hillside.

He said: “I found another elephant on Mars… yes you heard me correct.

“I found a head of an elephant carved into stone on a hillside.

“The elephant has features not only of an elephant but of a young elephant.

“This elephant and the one I found last year both have the exact same features including a defining one… small tiny ears.

“Yes, that’s important, because it means there may be a relation to elephants on Earth.”

He dubbed the find a stone carving of a baby elephant that matches ancient mammoths more than modern-day elephants.

The UFO hunter is now convinced there is a direct link between the two discoveries.

He said: “There are many legends about elephants in old mythology and religions of Earth.

“Stories that last millenniums always are based on truth.

“I think its time for NASA to face the elephant in the room.”

UFO sceptics, however, will likely dismiss the discovery as a product of pareidolia.

Pareidolia, which is a product of apophenia, describes our tendency to see recognisable shapes and patterns in everyday objects.

In this case, an oddly shaped rock and shadows have confused the brain into thinking an elephant was found on Mars.

According to researchers at the University of New South Wales, pareidolia is hardwired into our brains.

In a study published in the journal Psychological Science, researchers explained how seeing faces in everyday objects is very common.

Lead researcher Dr Colin Palmer said: “Our brain has evolved to facilitate social interaction, and this shapes the way that we see the world around us.

“There is an evolutionary advantage to being really good or really efficient at detecting faces, it’s important to us socially. It’s also important in detecting predators.

“So if you’ve evolved to be very good at detecting faces, this might then lead to false positives, where you sometimes see faces that aren’t really there.”