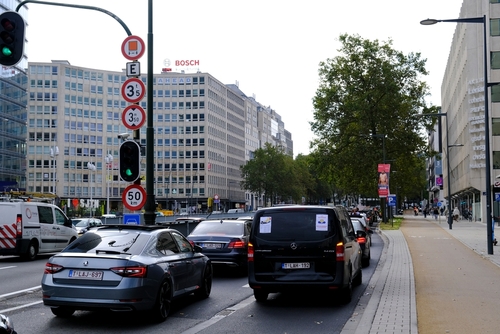 Brussels (Brussels Morning) The Brussels deputy Ecolo John Pitseys returned to the Uber issue, which divided the majority in the Brussels Parliament. He also announced that Ecolo is rallying to the proposed ordinance of the other majority parties (Défi, Groen, Vooruit and the Open VLD).

“We will see if this ordinance deserves to be improved or not. (…) We believe that it is a good thing to find a temporary and quick solution to alleviate a social emergency. And this social emergency is a judgment that risks setting aside hundreds or even thousands of Uber vehicle drivers. Therefore, while waiting to have a global framework that presents a balanced solution, we believe that it is more than possible to vote for this ordinance.”

Regarding the proposed temporary ordinance, the environmental leader does not want to hear about an alternative majority. He stressed that the text on the table had been made available to the majority by the cabinet of Minister-President Rudi Vervoort (PS). “We do not think that the cabinet of Mr. Vervoort produced this text under the dictation of Uber.” In passing, John Pitseys observed that this is the first time since the birth of the Capital Region that the first majority group has disowned the Minister-President.

This is a choice that the Socialist Party does not follow, which therefore finds itself isolated in the majority, at least on this issue. Ridouane Chahid – mayor acting as Evere and PS leader in the Brussels Parliament – explains himself.

“It is no secret that the PS is the only left-wing party in this majority. That the PS has a different position than the other parties on this Uber issue is not a scoop either. Now I think what is happening is much more serious. We must be aware that, today, following a court decision, parliamentarians are getting into the boot of a multinational which has been condemned in several countries because it neither respects labor law nor tax law. And so, these Brussels parliamentarians are saying to this multinational ‘Do not worry, in Brussels, even if you have been convicted, we will make sure that you can reactivate your application”, he laments.