Two opposition leaders arrested in Belarus after day of protest 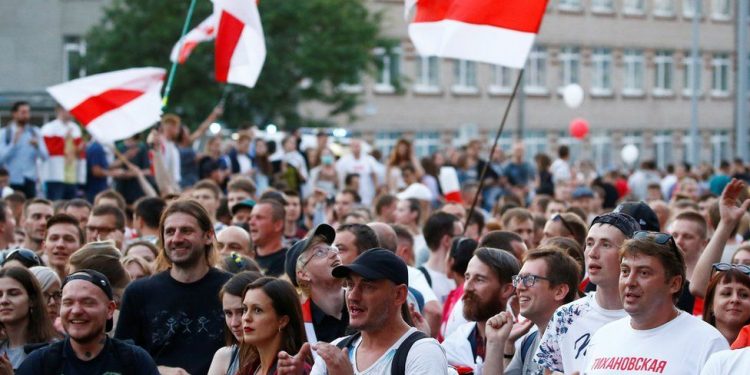 Belarusian authorities arrested two opposition leaders on Monday, as a showdown between the authoritarian president, Alexander Lukashenko, and a broad coalition of protesters continued into a third week.

Police detained Sergei Dylevsky, a factory worker who has become a prominent strike leader, and Olga Kovalkova, an aide to Svetlana Tikhanovskaya, the opposition politician who stood against Lukashenko in elections earlier this month but was forced to flee the country after the vote.

Both Dylevsky and Kovalkova are part of the seven-person leadership of a “coordination council” set up by the opposition to facilitate a transition of power in the country. The council also includes the Nobel laureate Svetlana Alexievich. Prosecutors have already opened a criminal case against the council, claiming it amounts to an illegal attempt to seize power, and Lukashenko has vowed to take “adequate measures” against it.

Both were led to a police van outside the Minsk Tractor Works, where the 30-year-old Dylevsky has organised strikes among workers, on Monday morning. “My hatred has overcome my fear and I am ready to go to the end,” Dylevsky told the Guardian last week, noting that many other workers at the factory supported the idea of a strike in principle but were scared of losing their jobs.

Liliya Vlasova, a lawyer who is also a member of the coordination council, said later on Monday that the pair had been detained for organising an illegal strike, which is an administrative, not criminal, violation. It was not immediately clear whether they had been charged. Dylevsky had already been questioned over the criminal case related to the coordination council last week.

On Sunday, a crowd estimated at more than 200,000 filled the centre of Minsk for a second weekend in a row, in a sign that the protest movement against Lukashenko is not losing steam. A crunch week is ahead, however, as Lukashenko has promised to “solve” the issue of street protests in the coming days.

On Sunday, protesters were warned over loudspeakers that the protest was illegal and would be met with force, but this did not happen, with riot police generally staying inside trucks stationed in side streets near the protest. However, it is possible Lukashenko will now order force to be used against the smaller demonstrations that have been taking place daily in the city.

On Sunday evening, Lukashenko’s press service released extraordinary footage of the embattled president flying above the protesters in a helicopter, ordering the pilot which direction to fly in and then saying “they’ve scattered like rats” as he looked down below. He later emerged from the helicopter at his residence, clad all in black and wearing a rifle, along with his son, who was also armed.

He exited the palace to greet a cordon of riot police sealing it off from protesters, and thanked them, telling them “we will deal with” the protesters. The police clapped him, and some could be heard to shout: “We are with you until the end.”

On Monday, Lukashenko was back in a suit receiving ministers. He appointed a new health minister and told the education minister that teachers who did not follow the “state ideology” should be fired.

The EU has said it does not recognise the result of the election, in which Lukashenko was declared the winner with 80% of the vote against 10% for Tikhanovskaya, and has called for dialogue between the two sides.

Lukashenko has claimed the protests are part of a Nato plot to destabilise the country and has appealed to Russia for military support. This has not been forthcoming, but the Kremlin has also criticised the west for backing Tikhanovskaya, and appears to be banking on a weakened Lukashenko seeing off the protests and being more amenable to pressure. Russia’s foreign minister, Sergei Lavrov, claimed over the weekend that the Belarusian opposition was seeking “bloodshed” in the country.