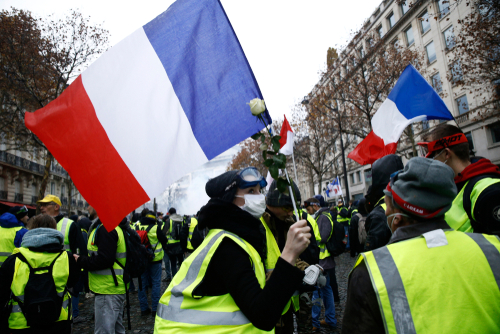 Brussels (Brussels Morning) Two Paris policemen will likely face charges for their actions during the suppression of the anti-government Yellow Vest protest in January 2019, when a crowd control grenade fired by one of the officers blinded a key protest figure in one eye, RFI reported yesterday.

Yellow Vest organiser Jérôme Rodrigues announced the news on Facebook, two years after a fragment of a grenade permanently damaged one of his eyes during a protest at the Place de la Bastille, where another protester sustained a serious leg injury.

According to Rodrigues, the French justice department informed him that the officer or officers responsible were now “under investigation”, while a separate source confirmed for AFP that two officers are being questioned over the events of 26 January 2019.

The investigators used video recordings and eyewitness testimonies to identify the officer suspected of firing the grenade, who is now likely to be charged with “wilful violence leading to mutilation or permanent disability”, a criminal offence that could result in a prison sentence. The second officer is being investigated for “excessive wilful violence”.

While both suspects are free, they remain under judicial control and cannot carry a sidearm or leave their homes without informing the investigators beforehand.

The brutality of the French police has become a contentious issue for French citizens. A recent government initiative aims to reconcile the force with its citizens through public consultations. NGOs continue to condemn police use of violence in their handling of peaceful protests.