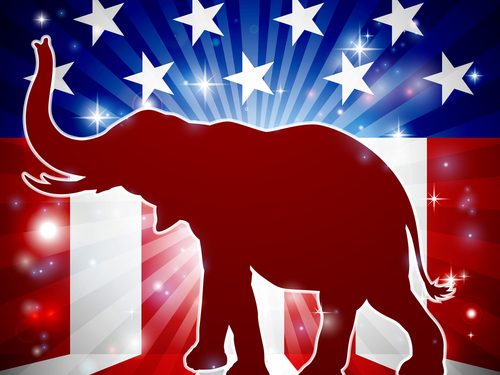 New York (Brussels Morning) Since Donald Trump left office as the US president, two storylines have emerged regarding the Republican Party. The first is that the GOP is increasingly dominated by forces aligned with, and blindly loyal to, the previous president. This narrative has led to unhinged supporters of Trump and Trumpism, like Representative Marjorie Taylor Greene of Georgia emerging as prominent figures within the party but has also led to the expulsion of Liz Cheney from the GOP leadership in the House of Representatives. Cheney is very conservative and the daughter of a former right-wing Republican vice-president, but her refusal to repeat the lie that Joe Biden is not a legitimate president and her criticism of the 6 January insurrection, has caused her party to turn against her.

The second storyline is slightly different and seems implicitly to contradict the former. The same Republican Party that seems to be descending into post-Trumpian madness is very likely to win back control of the House of Representatives in the 2022 midterm elections. Both of these narratives are accurate and represent an enormous threat to the US. The crux of this is that despite its current iteration as a party built around cult like loyalty to Trump and, therefore, to the lie that he was the real winner of the 2020 election, the GOP remains popular enough to do well enough in 2022, admittedly with assistance from new voter suppression laws and Republican gerrymanders in many states, to gain control of one house of congress.

This possibility has led to a lot of focus on how little time the Democrats have to pass Joe Biden’s ambitious agenda because they will be able to pass nothing if the House of Representatives is led by the Republican Kevin McCarthy rather than the Democrat, and Biden ally, Nancy Pelosi. That assessment is true, but the consequences of a Republican majority in the House of Representatives would be much graver than that.

House Republicans are already overwhelmingly pro-Trump and deeply invested in the big lie that US President Joe Biden was not the legitimate winner of the 2020 election. Fully 147 House Republicans, a majority of the House GOP caucus, voted against accepting the certification the election back in January. This is also a group that believes, or at least claims to believe, that Trump was a victim of unfair witch hunts throughout his presidency and that it is the Bidens who are steeped in corruption and criminality.

A Republican controlled House of Representatives would, therefore, not only mean that the Biden legislative agenda would grind to a halt, but also that House Republicans would turn their attention to investigating various scandals, real and mostly imagined, relitigating the 2020 election and very likely impeaching Biden. The absence of any evidence for these accusations and the certain acquittal by the Senate following any impeachment by the House will not be enough to prevent House Republicans from doing this.

If the Republicans win control of the House of Representatives, they will not only obstruct Biden’s attempts to address America’s problems, but they will also make no effort to govern, solve problems or find common ground with the administration. In 2017 and 2018 when the Republicans had control of both houses of congress and Trump was president, the GOP did not seek to find conservative solutions to America’s problems, as might be expected by a right-of-centre party. Instead, they simply became part of the freneticism and criminality that was the Trump administration. There is no reason to think anything will be different, in that regard, if there is a GOP majority in the House of Representatives.

The reality that the Trump wing of the GOP is becoming even more dominant within that party, while at the same time the Republican Party has a very good chance of winning back control of the House of Representatives is a good reflection of the paradox of American politics today. The competition between the two parties is quite intense, particularly as the Republicans benefit from both the structure of the senate and gerrymandering in many states, while at the same time one of those parties, the GOP, has been all but completely captured by an extreme wing that dwells largely in the realms of anger, grievance and fantasy.

It is now evident that despite Biden’s relatively strong approval ratings, his victory in 2020 was not enough to meaningfully move the US past Trump. Moreover, because there has been no effort from the government or the NGO sector to document and address the crimes of the Trump era including the corruption, nefarious relationship with Russia and with domestic white supremacist organisations, the 6 January insurrection and the murderous mishandling of the COVID-19 pandemic, the Trump movement remains relatively strong. It is possible that it may just take more time for Trump and his supporters to fade away, but it is more likely that, even if the Democrats hold on to their majority in the House, Trumpism will further consolidate its hold on the GOP and continue to be a major and deeply damaging part of American politics for the foreseeable future.