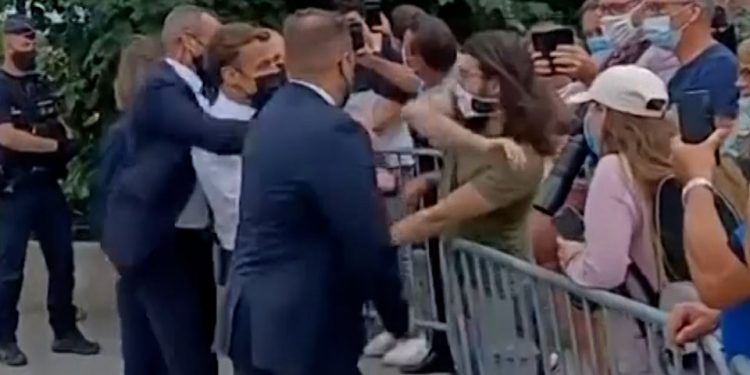 Brussels (Brussels Morning) Two people were arrested after a man slapped French President Emmanuel Macron during his trip to southeast France on Tuesday, in an incident which quickly went viral on French social media and beyond.

Macron was visiting the village of Tain-l’Hermitage in the Drome region, the second stop on his nation-wide tour ostensibly intended to “take the country’s pulse”. He approached a security barrier to greet a man who, instead of shaking the President’s hand, slapped him across the face.

The President’s security detail quickly intervened and two people were apprehended, according to local officials cited by RFI. “The man who tried to slap the president and another individual are currently being questioned by the gendarmerie”, said the official statement from the regional prefecture.

Ironically, Macron emphasised the need for calm and respect in democratic life just before the incident, commenting on remarks from the far-left leader of the France Unbowed party, Jean-Luc Mélenchon, who suggested that next year’s presidential election would be manipulated.

“Democratic life needs calm and respect, from everyone, politicians as well as citizens”, Macron declared during the visit. A little later, he exited his car to greet onlookers in the village who were calling out to him, when the slapping incident occurred.

The French leader is planning some dozen visits around the country over the next two months, since he is keen to meet voters in person after more than a year of coronavirus pandemic restrictions. Macron is looking to prop up his image ahead of the coming elections, with the far-right leader Marine Le Pen breathing down his neck in the popularity polls.

The Tain-l’Hermitage incident represents a serious security breach, highlighting the fact that Macron could have been the victim of a more serious attack. It has cast a shadow over the start of his country-wide tour.