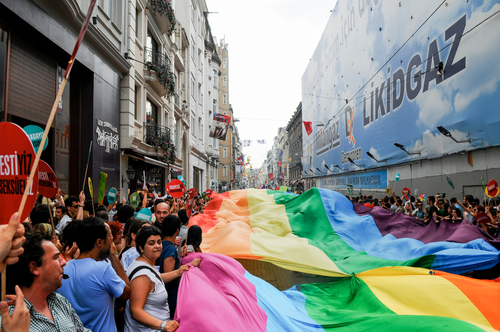 Brussels (Brussels Morning) Turkish police have arrested peaceful student protesters at Istanbul’s Bogazici University who had been demonstrating for the rights of LGBT people in the country, AFP reported on Tuesday.

Turkey was hit by a wave of students’ protests last month after a government loyalist was appointed the new head of Bogazici University. The police already arrested four students on Friday an artwork depicting the holy site in Mecca and an LGBT rainbow flag were put on display opposite the new rector’s office.

Several student groups joined the protest again on Monday and faced hundreds of riot police as they called for the release of the four arrested students. Reporters saw several students being dragged away by the police. Istanbul’s governor later confirmed that 159 protesters had been arrested.

Social media posts in the city of Izmir also showed police clashing with a small group of students waving a rainbow flag, though no official confirmation was received of arrests made there.

“We will carry our young people to the future, not as the LGBT youth, but as the youth that existed in our nation’s glorious past,” Erdogan said in an address to members of his party. “You are not the LGBT youth, not the youth who commit acts of vandalism. On the contrary, you are the ones who repair broken hearts.”