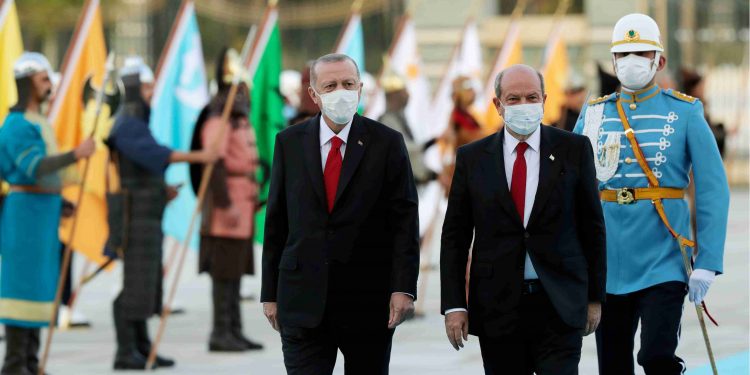 Brussels (Brussels Morning) Turkey’s President Recep Erdoğan has called for a two-state solution in Cyprus after meeting with Ersin Tatar, the newly elected President of Northern Cyprus, which is recognised only by Turkey, Reuters reported yesterday, Monday.

Cyprus was divided after the Turkish invasion in 1974. The most recent reunification attempt fell through in 2017.

Erdoğan accused Greek Cypriots of blocking attempts to find a solution and added that no result can be achieved under the current parameters which have dictated negotiations for more than 50 years. Talks about a federation would be a waste of time he stressed, leaving no option but to discuss a two-state solution. Tatar described Ankara’s proposal for an informal meeting between Cyprus, Greece, Turkey and the UN as the last chance for reaching an agreement.

Earlier this month, Northern Cyprus partially reopened the Varosha quarter in Famagusta, closed since 1974. Cyprus, Greece and the US criticised the move. Erdoğan has announced he will visit northern Cyprus mid-November and that he hopes to have the opportunity then to picnic in Varosha.

Varosha has long been a flash-point in the drawn out and so far futile Cyprus settlement process and Erdoğan call for a picnic there and pushing for a two-state solution, will hardly enhance the process, Bloomberg reported yesterday..

Erdoğan is planning to visit to the Turkish-controlled part of Cyprus on 15 November to help commemorate the founding of the unrecognised state in 1983. The move will harm relations with the Greek side as well as UN’s proposal to continue reunification negotiations. The Cyprus government has warned that unilaterally changing Varosha’s status represents a violation of Turkey’s international commitments.