Turkey takes Kiev’s side in conflict with Russia 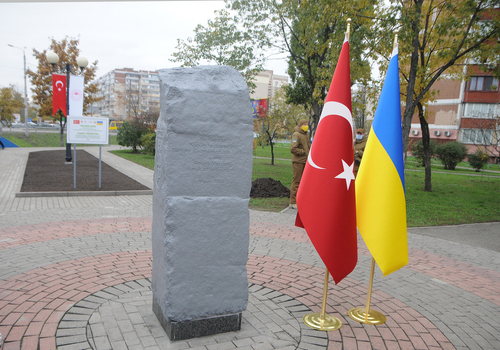 Brussels (Brussels Morning) Turkey’s President Recep Tayyip Erdoğan affirmed his support for Ukraine’s NATO accession and reiterated that the Crimean peninsula is not a part of Russia during the weekend state visit to Ankara by Ukrainian President Volodymyr Zelensky, Reuters reports.

“We stand for the territorial integrity and sovereignty of Ukraine”, Erdoğan declared after their meeting. “We reaffirmed our principled decision not to recognize the annexation of Crimea”. The Turkish President also expressed his support for the Crimean Platform, the Ukrainian initiative to involve the international community in solving the peninsula problem.

Despite Turkey’s NATO membership, Erdoğan has nurtured a close relationship with Russia’s President Vladimir Putin. This was manifest when he jeopardized Turkey’s participation in the next generation US F-35 fighter programme by opting to purchase the Russian-made S-400 air defence system. The decision ultimately led to the US shutting Ankara out of the programme and assigning the eight jets initially produced for assignment toTurkey to the US Air Force instead.

Erdoğan and Zelensky also issued a joint statement on Ukraine’s plans to join NATO, saying “it was agreed to express support for the prospect of Ukraine’s membership in NATO, in particular its intention to be accepted in the NATO Membership Action Plan (MAP) in the near future”.

Zelensky announced last week that he sees NATO membership as the only way Ukraine can resolve the separatist occupation in the Donbass region, in unveiling a diplomatic offensive to gain sponsors within the alliance to help Kiev enter the MAP. Meanwhile, the White House remains ambivalent on the subject of Ukraine’s NATO membership, given that Moscow is likely to see Kiev’s accession to the alliance as a provocation and a threat.

Russia’s TASS press agency played down the significance of Erdoğan’s statements, citing an expert claiming that the Turkish President’s remarks amounted to no more than a gesture of political courtesy.

“It is like music to the ears of the Ukrainian president”, Vladimir Fitin, of the Russian Institute for Strategic Studies, said. “He confirmed the previous position of Ankara – that it does not recognize Crimea’s reunification with Russia and fully supports the Crimean-Tatar diaspora [which is] on Turkish territory as well”.