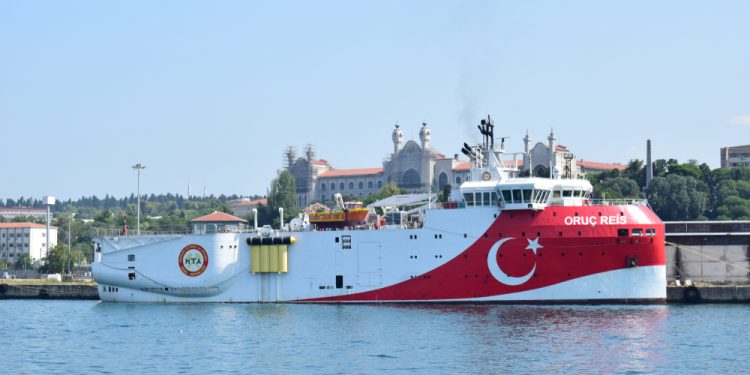 Brussels (Brussels Morning) Turkey has stopped its hydrocarbon exploration in disputed waters of the Eastern Mediterranean, withdrawing the Oruç Reis survey vessel to port on Monday, ahead of the EU summit where member states are scheduled to discuss possible sanctions against Ankara, Reuters reported today, Monday.

Tensions between Turkey and the EU heightened in August, when Ankara deployed the Oruç Reis to waters also claimed by Greece. Before the EU summit in October, Turkey withdrew the survey ship, but redeployed it after the summit failed to meet Ankara’s expectations.

The next EU summit is slated for 11-12 December, with France pushing for sanctions against Turkey. While France has not proposed any specific measures, unnamed diplomats have suggested sanctions would likely target sectors of the Turkish economy connected with hydrocarbon exploration.

Greece and Turkey had agreed to resume talks about the disputed waters issue in September, no progress having been made on the issue in the last four years or so.  Then Greece opted to put the talks on hold for as long as Turkey keeps vessels in the disputed region.

Turkey’s Ministry of Energy and Natural Resources has stated that the Oruç Reis collected seismic data on the mission that began on 10 August and that the ship has now returned to the Antalya port. According to ship tracking data, the Oruç Reis was in Antalya Monday morning whereas another survey vessel, the Barbaros Hayreddin Paşa, was at sea south of Cyprus.

The Oruç Reis symbolises Turkey’s desire to find hydrocarbons in disputed waters despite objections from Cyprus and Greece, RFI reports. Turkey deployed naval frigates to accompany the vessel in August and October despite warnings against the move by the EU and the US.