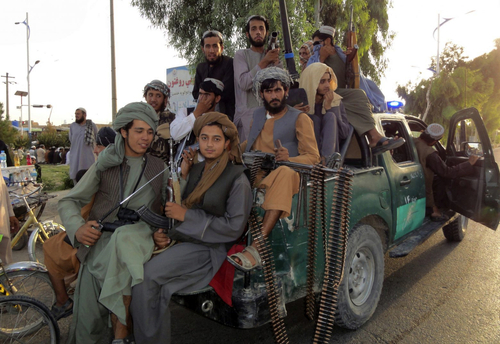 Speaking at a press conference at the Atatürk Airport in Istanbul, he pointed out that the government has not made a decision at this point, according to Associated Press reporting on Friday.

Erdoğan announced that Turkey would decide on the matter “after the administration (in Afghanistan) is clear.”

He did not say when the meeting with the Taliban at the Turkish embassy in Kabul took place, but pointed out that it lasted more than three hours. “If necessary, we will have the opportunity to hold such meetings again,” Erdoğan added.

Commenting on the suicide bombing at Kabul Airport on Thursday, he condemned the attack and noted that Turkey is still evacuating its troops from Kabul, reiterating that the evacuation started on Wednesday.

The idea to have Turkey operate the Kabul Airport after NATO troops withdraw from Afghanistan was first proposed in June, but apparently fell out of focus when the Taliban retook the country.

Zhao Lijian, deputy head of the Chinese Ministry of Foreign Affairs Information Department, condemned the attacks at the daily briefing on Friday.

He announced that China is “ready to work with the international community to address the threat of terrorism and prevent Afghanistan from becoming a source of terrorism again.”

Zhao pointed out that no Chinese were injured in the attacks and added that Beijing advised Chinese citizens in Afghanistan to “strengthen security precautions,” noting “we have requested the relevant parties to take measures to ensure the safety of Chinese personnel.”

“We hope that the relevant parties will take effective measures to ensure a smooth transition of the situation in Afghanistan and the personal safety of the Afghan people and foreign citizens there,” he concluded.

The Chinese embassy in Kabul remains open and the ambassador hosted talks with the Taliban there, criticising the US over the situation at Kabul Airport.