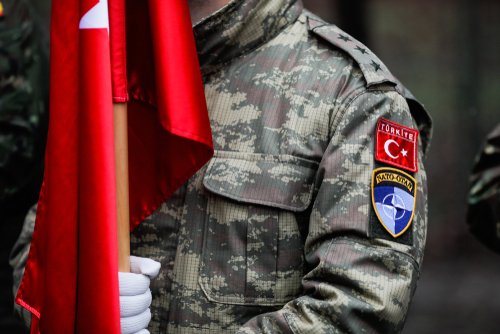 One of Turkey’s most authoritative diplomatic voices reiterates Ankara’s commitment to a Euro-Atlantic trajectory and underscores that Turkey remains a strong advocate of NATO enlargement.

Washington, D.C. (Brussels Morning) Turkey’s relationship with NATO as well as individual allies has been tested after the July 2016 attempted coup.

To the traditional rivalry with Athens, there are now open fronts with Washington and Paris. The United States does not see eye-to-eye with Turkey across a number of diplomatic fronts: the Kurdish issue in Syria, the purchase of a sophisticated Russian anti-aircraft system, Libya, and Israel.

This range of challenges present a major institutional challenge for the 70-year old Alliance for two reasons: first, NATO functions on the basis of political consensus; secondly, Turkey is not “just another member” of the Alliance.

Strategically located between Europe and the Middle East, Turkey has been a cornerstone of the Euro-Atlantic security architecture. To get a Turkish perspective on the dynamics of this relationship, Brussels Morning speaks to Ambassador Tacan Ildem, a member of NATO Experts Group, who recently presented a report entitled “NATO 2030: United for a New Era.”

The senior diplomat served Turkish foreign policy from 1978 to February 2021, serving as permanent Representative to NATO as well as Assistant Secretary-General between 2016 to 2020. Ambassador Ildem has also served as Ambassador to the Netherlands and in diplomatic missions in Washington, Athens, and New Delhi.

Ambassador Tacan Ildem (TI).  December 2019 NATO Leaders asked Secretary General Stoltenberg to initiate a reflection process designed to strengthen the political dimension of NATO. In March 2020 the Secretary General appointed a group of experts – five women and five men – to support him in this initiative. In our almost 100 meetings, held virtually because of the pandemic, we reached out to high level government representatives, military officials, think-tank community and subject matter experts. We regularly touched base with the Secretary General and consulted with the Ambassadors on the North Atlantic Council (NAC). The consensual nature of the report adds to its weight.

The report emphasizes the need for NATO to adapt to a more demanding strategic environment of renewed geopolitical rivalry taking into account multiple factors: Russian aggression, the rise of China, the growing role of the emerging and disruptive technologies (EDTs). Policy reflections focused on NATO’s response to the need of strengthening social resilience against hybrid threats, the security implications of climate change, arms control and human security. In line with the London Declaration, the report also points to the danger of terrorism in all its forms and manifestations, a consensus also shared by Russia.

TJ. Is there a practical takeaway of the report?

TI.  It calls for nothing less than the revision of NATO’s Strategic Concept.

NATO’s current Strategic Concept dates back to 2010. Since then there have been important changes that are not addressed in the present Concept like China or Emerging Disruptive Technologies. Updating of the Concept would give NATO the opportunity to project a forward looking vision to confront new strategic realities. We deliberately referred to an update rather a new Strategic Concept, as did not wish to debate the Alliance’s three fundamental objectives: collective defence, crisis management and cooperative security.

But the report is the first document that takes stock of the strategic significance of the 2014 illegal and illegitimate annexation of Crimea by Russia.

TJ. How does the report deal with the dismissal of NATO as “brain dead,” as articulated by French President Emmanuel Macron?

TI. Our report reiterates that NATO is alive and kicking. After 70 years, NATO stands out as the most successful alliance in history, able to adjust to the evolving political and military challenges.

What probably led President Macron to make such a statement was basically his frustration that France was sidelined in Syria with the unilateral withdrawal of US troops and the national operation initiated by Turkey. Ironically, though, it was France that has traditionally resisted attempts to debate certain issues in NATO. It was Turkey that tabled discussions on Syria on the North Atlantic Council in recent years.

Our report puts forward a proposed code of conduct among Allied leaders that I hope will be taken seriously. Consultations NATO should be used more as the essential forum of Allied consultations where the full spectrum of national-security issues facing Allies could be debated, even when NATO may not be the first responder.

TJ. What about the European “strategic autonomy” and NATO’s cooperation with the EU?

TI:  In our report we reiterate that efforts at EU’s “strategic autonomy” should be developed in a spirit of NATO cohesion with a common vision, building on the foundations of cooperation between the two organisations established almost two decades ago.

There is no doubt that better resourced European defence will contribute to a stronger NATO. In this context, the fullest involvement of those NATO Allies that are not members of the EU in EU initiatives like PESCO and EDF will be essential.

TJ. Talking about Turkey, did the procurement of S400s from Russia surface in your discussions and is there any reference to that in the report? What would you say about the US sanctions imposed against Turkey?

TI: During our deliberations this question did come up. There is no direct reference to Turkey’s acquisition of S400s in our report.

In the section on Emerging or Disruptive Ttechnologies Allies are encouraged to commit to invest in military-technological cooperation to limit the prospect of key technologies being exploited by non-member states. Any sanction imposed by a NATO Ally against another Ally would not serve any purpose except making NATO’s potential adversaries happy.

When we talk about strengthening unity, it is incumbent on Allies to resolve some of their differences with constructive engagement and purposeful dialogue. Sanctions are irreconcilable with the spirit of unity and solidarity among Allies. With the second biggerst Army in the Alliance,  Turkey is a key contributor in collective defence, participating in all operations and missions. Turkey has consistently back every move to detter Russian advances and terrorists threats.

TJ. Are there any institutional recomendations of relevance in your report?

TI: The principle of consensus is a cornerstone of the Alliance: we are not recommending any change to this fundamental principle. Since lives of men and women in service are at stake, the conensus approach is important in every mission. Even within the EU, when it comes to military operations there is a need for a “qualified majority” when it comes to defence and security.

TJ. Since China is in NATO’s focus can we say that it is becoming a global organization?

TI. While launching the NATO 2030 process Secretary General Stoltenberg laid out three priorities: making sure NATO remains strong militarily, stronger politically, and takes a more global approach. The latter does not suggest that NATO should become a global Alliance, but for it to have a better appraisal of what is happening in the world since cyber threats and hybrid actions blur the line between peace and war and present dangers with no boundaries or geographic regions. However NATO will remain a regional organization.

The Open-Door Policy is a founding principle of the North Atlantic Treaty and its success story. Recalling the 2008 Bucharest Summit decision the report recommends the expansion and strengthening of partnership with Georgia and Ukraine and elevation of their membership processes to a higher level.