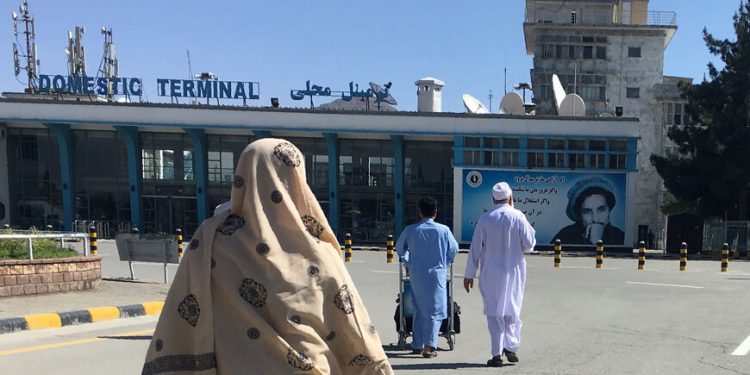 This photo taken on May 8, 2018, shows people arriving at the domestic terminal of the Hamid Karzai International Airport of Kabul. (Photo by Dominique FAGET / AFP) (Photo credit should read DOMINIQUE FAGET/AFP via Getty Images)

Brussels (Brussels Morning) Turkey is offering to protect the Hamid Karzai International Airport in Kabul after US forces withdraw from Afghanistan.

Experts say the move represents an attempt by Turkey to thaw relations with Washington, in light of the US planned pull-out from Afghanistan by the end of August, RFI reports.

The airport is of strategic importance because it is the safest route for humanitarian aid to reach Afghanistan and for embassy staff to leave the country.

The Turkish proposal gives President Recep Erdoğan an opportunity to improve relations with the US and the West in addition to helping Ankara avert a wave of refugees by making sure aid routes remain open.

Turkey downplayed the diplomatic importance of the proposal, with a Turkish diplomat stressing “our objective is to make sure Afghanistan is not closed to the outside world, that it is not isolated”.

The UN warned earlier this month that approximately 50% of the Afghan population needs aid and stressed that about the same ratio of children under five suffers from acute malnutrition.

Magdalena Kirchner, country director for Afghanistan at the Friedrich Ebert Foundation, pointed out that “Turkey has a vested interest in Afghanistan’s stability”.

She noted that “Turkish ambitions to remain engaged despite the US withdrawal appear genuine but carry risks for protection of its own forces, should violence escalate”.

While the Taliban denounced the idea of maintaining a Turkish military presence in Afghanistan as reprehensible, Turkish officials are more optimistic. “In our discussions with the Taliban, they say: ‘we trust you, we know you don’t have a hidden agenda'”, a Turkish source noted.

Turkey still has approximately 500 soldiers in Afghanistan as part of NATO’s non-combat mission, which has almost completely withdrawn from the country.

According to a Turkish source, the EU is worried that the withdrawal of international troops from Afghanistan will lead to a new refugee wave. In 2016, the EU and Turkey reached an agreement by which the EU pays Turkey for hosting migrants.