Turkey lashes out: Erdogan warns Greece ‘we will never back down’ in standoff 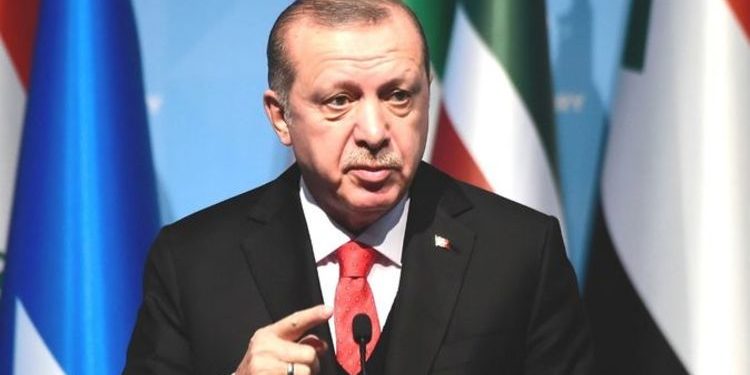 TURKEY’s President, Recep Tayyip Erdogan, has lashed out at Greece, saying his country will never back down in the eastern Mediterranean and saying he will not tolerate “banditry” close to the Turkish mainland.

And he warned he was ready to do “whatever is necessary” in a stark warning to the country’s neighbours which will set alarm bells ringing in the international community. Mr Erdogan made his remarks against a backdrop of rising tensions in the region as a result of Turkey‘s decision to send research vessel the Oruc Reis to undertake a seismic survey close to the Greek island of Megitsi, also known as Katellorizo, located less than two miles off the Turkish coast. He vowed never to submit to sanctions nor to incursions on its claimed territory.

He added: “We will never bow to banditry on our continental shelf.

“We will not back down against the language of sanctions and threats.”

“We have shown that we have softened our stance. “However, Greece does not respond to this approach.

“If they continue like this, we will do whatever is necessary.

“At the moment, our priority is to protect our rights to the maximum in the Eastern Mediterranean, Libya and the Aegean.

The ship was accompanied by several Turkish naval vessels.

He explained: “The responsibility lies with the one who causes these conditions.

“We will never be the first to sharpen things.

The European Union yesterday held a special meeting of its Foreign Affairs Committee at which the situation was discussed.

A statement issued subsequently said: “Ministers stressed in particular that recent naval mobilisations by Turkey do not contribute to finding solutions.

“On the contrary, they will lead to greater antagonism and distrust.

“They create a heightened risk of dangerous incidents.”

The row has been simmering for several days, with Mr Erdogan delivering a fiery speech in Ankara yesterday in which he condemned what he characterised as Greek double-standards in an apparent reference to similar research undertaken by Greece.

He said: “Since 2003, the Greek Cypriots have treated the island like their property and issued petroleum and natural gas exploration licences within the island’s maritime jurisdiction, over which they have no rights.

He added: “Another objective of those unlawful steps is to imprison Turkey, the country with the longest coastline along the Mediterranean, in the Gulf of Antalya.

“All those steps are designed to contain Turkey from the sea.”

Mr Erdogan is also angry at France for beefing up its military presence in the region and staging joint military exercises with Greece.

Separately, Mr Erdogan has also threatened to suspend diplomatic ties with the United Arab Emirates in response to a deal which re-establishes normal relations with Israel.

Palestinian leaders have reacted angrily to the agreement, and Mr Erdogan said: “The move against Palestine is not a step that can be stomached.

“Now, Palestine is either closing or withdrawing its embassy.

“The same thing is valid for us now.”