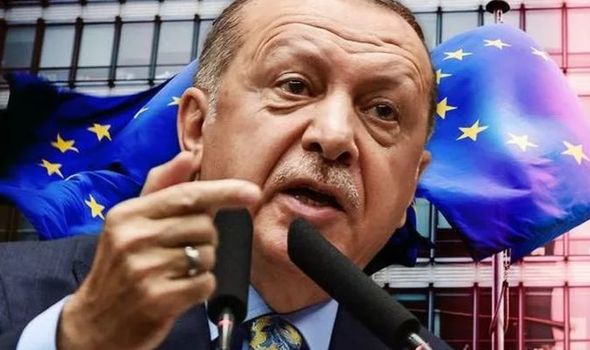 TURKEY has issued a military threat to the EU warning President Recep Tayyip Erdogan is ready for anything as tensions over the Eastern Mediterranean rise.

In a strongly-worded speech, President Erdogan said this weekend Turkey is prepared for every possibility and consequence regarding the Eastern Mediterranean issue. Speaking at the opening ceremony of a hospital in Istanbul, he stressed that Turkey has “the political, economic, and military power to tear away immoral maps and documents imposed by others”.

Ankara and Athens have been locked in a bitter dispute over claims to potential hydrocarbon resources in the region, based on conflicting views on the extent of their continental shelves.

Turkey sent a survey vessel, escorted by frigates, to explore for oil and gas in waters claimed by Greece, a move Athens said was illegal last month.

A collision between the Greek and Turkish warships shadowing the survey vessel last month highlighted the risk of conflict whilst Turkey has also undertaken military drills.

The EU has already imposed minor sanctions against Ankara over the matter and the 27 EU leaders will tackle it again soon at an upcoming meeting in Brussels.

EU Council President Charles Michel, who will host the meeting, said the EU would reaffirm its support for Greek and Cypriot sovereignty.

Mr Michel, who is due to travel to Greece, Cyprus and Malta before the summit, also proposed an international conference on the eastern Mediterranean involving the key parties and NATO.

Michel said the gathering could discuss the thorny issue of maritime boundaries in the eastern Mediterranean, energy, security and migration.

In a statement, Mr Michel said they were focusing on a “carrot and stick” approach when they meet on September 24th and 25th.

He added: “That could be the best way to de-escalate in the region and offer a channel for dialogue.

“What is happening, what has been happening in the last few weeks, cannot go on.”

France has supported Greece in the east Mediterranean, joining military exercises with Italy, Greece and Cyprus amid conflicting Greek-Turkish claims to continental shelves in areas of exploration for oil and natural gas.

But Turkish Foreign Minister Mevlüt Çavuşoğlu said France was the country provoking Greece the most in the eastern Mediterranean and urged Paris to cooperate with Turkey to achieve regional stability.

He added: “There is no need for such hysterical behaviour from France, it makes them look laughable.

“We are two NATO member countries.”

Relations between the EU and Ankara could be seen as bilateral as Ankara has long sought an upgrade of its customs union with the EU.

The process has been stalled over President Erdogan’s sweeping anti-terrorism legislation that underpinned widespread jailings of opponents following an abortive 2016 military coup.

At the same time, the bloc relies on Turkey to prevent millions of Syrian and other refugees and migrants on its soil from heading to the EU, where migration feuds have spurred the rise of eurosceptic nationalist parties in recent years.

The EU has already promised 6 billion euros to help Turkey host migrants but Ankara has long complained the money was too slow to arrive.