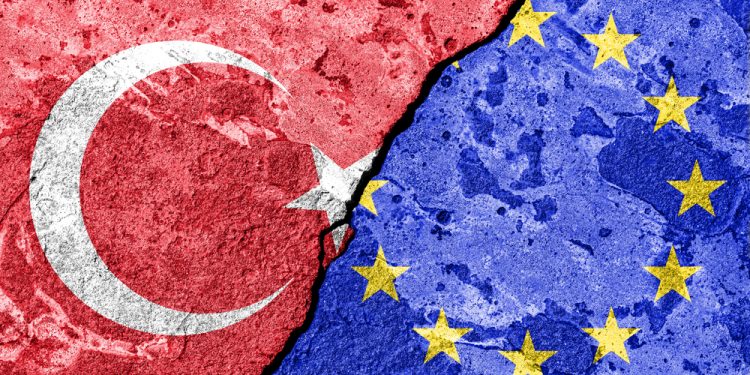 The crack between the European Union and Turkish flag

The EU is agreed to draw up limited sanctions against Turkish entities and individuals involved in the energy exploration, but notes too that talks about more severe measures will take place in March.

EU member states agreed to prepare sanctions at their summit meeting on Friday, after which Germany’s Chancellor Angela Merkel stated that the bloc plans to discuss the issue of arms exports to Turkey with NATO allies since Greece is pushing for an embargo.

“It is out of the question for us to abandon our rights and interests in the Eastern Mediterranean because we will face sanctions or the EU will criticise us,” Çavuşoğlu declared in Turkey’s parliament.

Turkey’s President Recep Erdoğan expressed his dissatisfaction on Monday over plans by the EU and the US to impose sanctions, noting that Turkey’s expectations are about joining the EU, not being sanctioned by the bloc.

US imposes sanctions on Turkey

On Monday, Washington imposed sectoral sanctions against Turkey, targeting its defence industry, Bloomberg reports. The US imposed the sanctions in response to Ankara’s purchase of the Russian S-400 missile system, a move Washington had warned Turkey against.

US Secretary of State Mike Pompeo pointed out that the US “made clear to Turkey at the highest levels and on numerous occasions that its purchase of the S-400 system would endanger the security of U.S. military technology.”

In line with the sanctions, Turkey’s arms procurement agency is cut off from access to US military technology and financial institutions. While not directly targeting Turkey’s economy or defence industry, the move should have negative effects on Turkey’s military influence in the region.

A statement by Turkey’s presidential spokesman İbrahim Kalın notes that “as a strong NATO member with the second largest army in the alliance, Turkey expected and would have preferred to develop its air defence system with NATO allies but they failed to understand and respond to Turkey’s pressing national security concerns.” Turkey insists the purchase puts neither US nor NATO systems at risk.