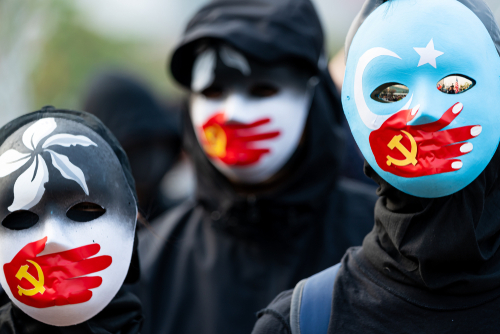 HONG KONG - DECEMBER 22 2019: A group of protestors wear masks symbolizing the Communist Party of China's silencing of Uyghur Muslims and the Hong Kong pro-democracy movement at a rally in Hong Kong.

Brussels (Brussels Morning) While there is no evidence for these allegations so far, a series of recent developments is giving Turkey’s Uyghur minority cause for alarm. Of particular concern is an extradition treaty between China and Turkey that was signed years ago and was just ratified by China in December. A bill of ratification could now be put before the Turkish Parliament in the next month.

Both the opposition and the Uyghurs fear this could signal a start to mass deportation of Uygurs back to the country they fled to avoid mass detention. Adding to this fear are reports of a growing number of raids on Uyghurs in Turkey, with at least 50 having being detained in deportation centres.

At the same time, deliveries of China’s Sinovac vaccine are falling behind. According to senior opposition politician Yildirim Kaya, China has so far delivered only a third of the doses it promised to ship by the end of January. “Such a delay is not normal,” Kaya told AP. “We have paid for these vaccines. Is China blackmailing Turkey?”

Chinese and Turkish authorities deny any link between vaccine shipments and ratification of the deportation treaty. However, the Uyghurs remain concerned about recent statements made by Turkey’s Ambassador in Beijing, who, while praising China’s vaccines, made a point of emphasising how Ankara “values its judicial cooperation” with the Chinese authorities.

Lawyers defending detained Uyghurs claim that most cases feature no evidence of any links to terror groups. Ankara law professor Ilyas Dogan, who represents six Uyghurs currently in detention centres, believes their arrests were politically motivated. Dogan believes ratification of the treaty would probably not lead to mass deportations, given that the Uyghur minority enjoys  considerable public sympathy in Turkey, but it could lead to an increase in individual deportations.

Abdurehim Parac, an Uyghur poet who was detained twice in Turkey before a judge cleared his name, noted that the Turkish prisons were “like hotels” compared to the conditions he was subjected to in Chinese prisons. He still has trouble sleeping at night, fearing the ratification of the treaty. “Death awaits me in China,” he said.